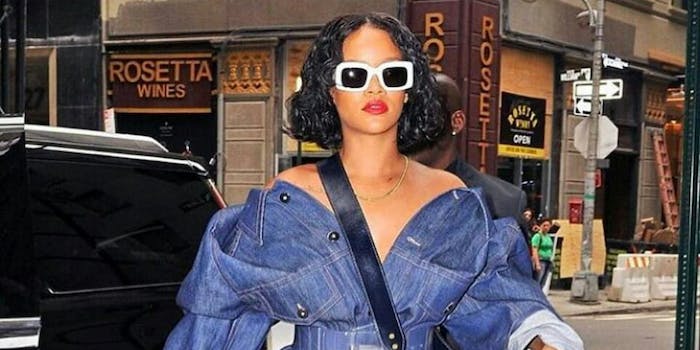 Rihanna didn't have to say a word to take down the Barstool blogger.

With the help of a simple meme and a single crying emoji, Rihanna clapped back at the body shamer who criticized her figure last week.

Blogger Chris Spagnolo wrote a post for Barstool Sports titled: “Is Rihanna going to make being fat the hot new trend?” (It has since been taken down.) Spagnolo’s Twitter still links to the article and shares the photo that inspired him.

Is Rihanna going to make being fat the hot new trend? https://t.co/DnFdi9AZy3 pic.twitter.com/r6jed6wRiQ

“A world of ladies shaped like the Hindenburg loaded into one-piece bathing suits may be on the horizon now that Rihanna is traipsing around out there looking like she’s in a sumo suit,” Spagnolo wrote in his original article.

Rihanna responded with an Instagram post on Monday. The post was a meme showing side-by-side’s photos of Gucci Mane in 2007 and 2017, where he’d clearly gained about 20 pounds.

Without saying a word, Rihanna showed the hypocrisy that exists in mainstream culture, where women get berated when they gain a couple pounds but society remains silent when men do the same.  The online response to Rihanna’s post has been positive, with many fans telling her that body shamers don’t deserve her, period.

“They just straight up can’t handle you,” one user wrote. “You’re beautiful in all of the ways that a person can be beautiful, so ignore them and stay real!”

Meanwhile, Barstool Sports indefinitely suspended Spagnolo. The blogger didn’t take the suspension well and he’s been updating his Twitter every day about it, posting photos with a sign that says “#FreeSpags.”

“Breaking: my boss can’t handle getting called out in Cosmo now that he’s trying to f–k anyone who reads Teen Vogue,” he wrote the day he was suspended.

Breaking: My boss can't handle getting called out in Cosmo now that he's trying to fuck anyyone who reads Teen Vogue https://t.co/b3bHBrt4YI

One sad fact about my situation: I carried way too many people's strollers and carts up subway stairs lately and felt overdue for good karma

It doesn’t look like he’ll be getting his job back anytime soon.