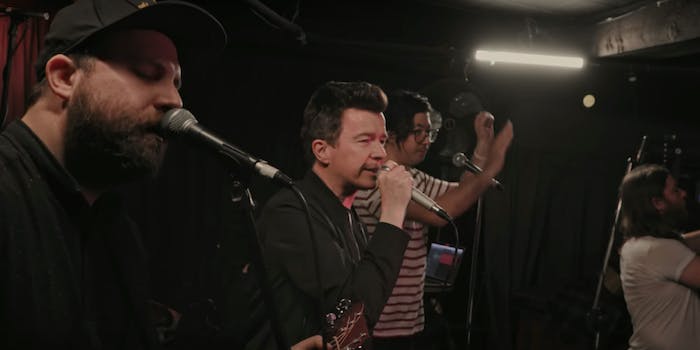 Rick Astley’s “Never Gonna Give You Up” has become synonymous with bad online pranks, aka Rickrolls. But Astley is embracing its all-purpose use. He might even be trying to change the narrative. He performed the song with the Foo Fighters in 2017, and now he’s sitting in with a Canadian choir.

The Toronto-based Choir! Choir! Choir! invited Astley to sing with them earlier this month, when it performed his classic song. And he showed up to sing along with the crowd.

It’s an earnest rendition, and sort of recontextualizes the song.

I saw a video of @ChoirChoirChoir asking me to come perform Never Gonna Give You Up with them while I was in Toronto, so I took them up on the offer! Had a great time with these very talented people. Rick x https://t.co/WIztWcBl5W pic.twitter.com/99la6WRqOz

This is way better than Westworld showrunners using it to troll fans.