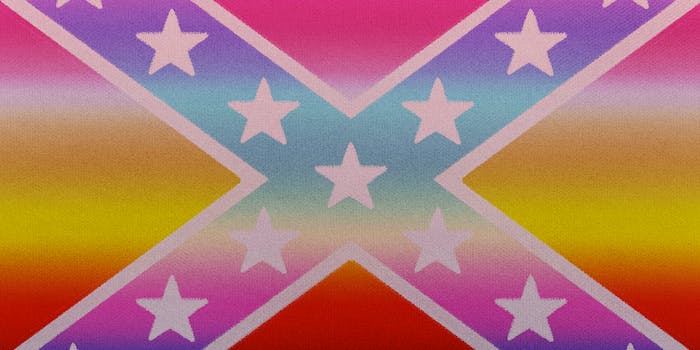 A scathing critique of what sexuality, moralism, and success mean in America right now.

Before the days of swatting, Gamergate, rape threats, and general cyber bullying, there was a certain kind of trolling on the Internet that was good, harmless fun. It was a punk rock kind of trolling, where if you were offended, you probably deserved to be—sometimes, if something makes you uncomfortable, it’s because you’re a dick.

I didn’t expect to find that sort of old-school trolling in A Confederate Flag Turned Me Gay—I thought this review would be something quite different, to be honest—but I ended up feeling downright nostalgic as I read this bundle of troll fiction.

It should be noted that this is not a book—at just more than 3,000 words, it’s more of an essay, that just happens to be told via a fictional first-person narrative—and some people might feel ripped off when they open their $0.99 purchase from the Kindle store and see that it’s only 20 pages long, but let me assure that it’s very certainly worth the price of a small fountain drink.

A Confederate Flag Turned Me Gay feels like something new; it’s A Modest Proposal meets 4Chan, and it’s brilliant. You know that LeRoy Ned Malone—a pen name—is onto a new form of satirical writing by the end of the opening paragraph:

I first fell in love with the Confederate Flag when I encountered a small one in the stall of the locker room at the local gym. The flag was taped to the sidewall right above the toilet paper dispenser with a big hole cut right in the center of that beautiful starry blue X. The hole continued through the wall, and as I sat there taking a shit, I heard the sexiest, sultriest voice ever say, “Stick that gorgeous dick in here big boy.”

Let’s look at the issues of the day in America: LBGT equality, racism, the Confederate flag being dropped from major retailers… they’re all addressed here beautifully. South Park itself couldn’t tackle the current cognitive dissonance and general confusion in our nation better than words like these:

Prior to that fateful moment in the locker room, the Confederate flag held little meaning to me. It’s not that I was one of those pussies who thought it was some outdated symbol of racism or hatred. I knew good and well that it was much more than that. The problem was that I just didn’t feel connected to it like most of my friends did. I blame my parents. They never even flew the flag over our trailer, which embarrassed me every time I brought a friend home. And I’m pretty sure it’s why I never got laid. Maybe I wouldn’t have spent so much time jerking it to Daisy Duke still-shots if my parents had been a little more open-minded.

Malone even stops for a breather to take a swat at ridiculous Kickstarter campaigns, as our unnamed protagonist describes the creation of the website that turned him into a millionaire, some time after he put his penis through a hole in a Confederate flag to get a suck job from an unseen person:

The site’s tagline is “Babes So Hot They’ll Make the South Rise Again.” It was an instant smash, backed by a successful Kickstarter campaign that was funded in less than a day. I think it was so successful because it’s all solo or girl-on-girl. Real men don’t get their rocks off watching other dudes fuck women.

It’s pretty sweet being able to launch a multi-million dollar corporation without even putting up any of your own money. We live in such wonderful times.

The site’s a big hit, but Malone points out that it’s not the pornography that brings in the bulk of his money, but rather the ad revenue:

But it’s really the ads that bring in the profits, mostly ads for Confederate flag merchandise that everyone else is too afraid to sell.

Ouch. In one sentence, Malone points out why the progressive pulling of these flags from mainstream outlets is stupid better than any 2,000 word op-ed could. In all the liberal celebration of Walmart and Amazon pulling the Bars and Stars, it hits like a ton of bricks when you suddenly realize who’s really going to benefit from all the banning: Scumbags like our protagonist. It’s like selling Rebel merchandise is now a black market activity, with the benefit of being completely legal.

Yes, A Confederate Flag Turned Me Gay, an ebook with its title written in Comic Sans, is truly one of the best op-eds I’ve read in years.