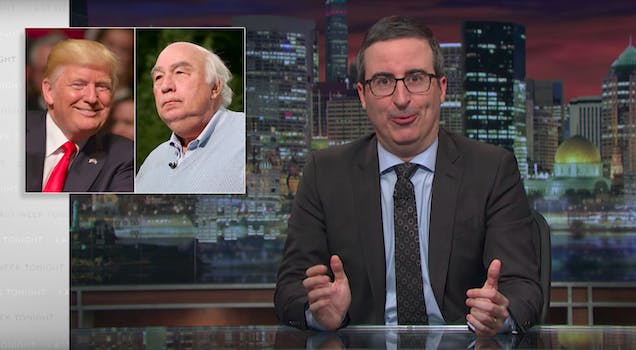 He gave warning he would.

A Republican coal mogul is suing John Oliver over the Last Week Tonight host’s segment on one of the country’s largest mining companies.

According to the Washington Post, Robert E. Murray, CEO of Murray Energy Corporation, accused the show of a “meticulously planned attempt to assassinate [his] character and reputation.” He is also suing HBO and Time Warner Cable.

The episode that fueled the lawsuit aired Wednesday and began with Oliver talking about President Donald Trump’s promise to bring back coal miner jobs. And while, indeed, such jobs have been in decline since former President Obama was in office, Oliver said part of the problem is that company CEOs have cut benefits from miners while paying themselves more money. He then pointed out Trump’s love for mining CEOs, bringing the conversation to a full 10-minute blast on Murray.

In the segment, Oliver also said Last Week Tonight contacted Murray Energy before airing the piece, and in response, Murray Energy told the late-night show to “cease and desist.” Murray Energy informed the show that their failure to follow their request would result in immediate litigation.

Oliver, who ignored the warning, went on to talk about Murray’s disregard to mining safety and his odd advice from a mythical squirrel. The safety topic was the heart of the problem with the segment for Murray.

Oliver seemed to have blamed the Utah mine collapse, which killed nine people, on safety issues. Murray, however, said his team sent the show documents proving that the incident was due to an earthquake.

The main point of Oliver’s segment was to point out that Trump, along with mining CEOs, need to address the realistic job problems with workers, instead of making empty promises.

“Trump needs to stop lying to coal miners,” Oliver said. “Stop telling them their jobs are coming back when they’re not… an honest conversation about coal and it’s miners needs to be had.”