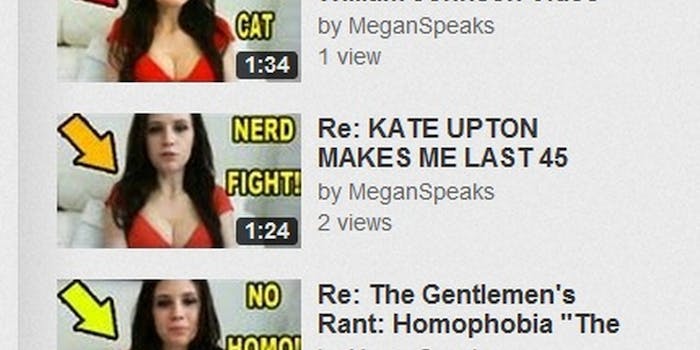 Some women have figured out how to get views with cheap sex appeal, and the men are not amused.

Boobs are everywhere on YouTube, and they are smothering out the voices of the men—or at least some prominent YouTubers.

For weeks, cries of censorship and cyberbullying have been echoing across the digital halls of the video-sharing site as a few prominent men have come out swinging, accusing opportunistic women of using their sex appeal—read: boobs—to rob them of traffic and the cash that comes with it.

This latest YouTube controversy centers around a roughly eight-month-old phenomenon known as “the reply girls.”

The reply girls are young women—some young enough to still be in high school—who make videos in low-cut tops and push-up bras. Rather than baring their souls, they’re baring that age-old device often used to get attention: cleavage.

Their sole intention—by their own admission—is to draw traffic and make money and they’ve figured out ways to game the YouTube system. Some cite their poverty as the reason they’ve gone into the reply-girl business.

The tricks they use—along with their sex appeal—include the manipulation of video tags and the ability to spot videos as they’re going viral.

And those making the videos they’re responding to—primarily men—are none too pleased. For weeks they’ve been decrying the practice, calling out the reply girls for robbing them of clicks and money that they say should be theirs.

“You know something is wrong if I have to complain about boobies,” said YouTuber Skweezy, in a video last week that now has nearly 800,000 views since hitting the front page of the social news site Reddit.

The problem is basically a technical one having to do with related videos.

In the world of YouTube, fans often respond to popular videos by making their own response video. Those show up in the “related videos” space both at the end of the video, and on the right side bar, along with actual, similar videos.

The idea is that if you watch a popular video featuring a puppy playing with a baby, or a video game walk-through, you’ll want to watch similar videos, found on the right-hand side of the screen. Increasingly, however, those related videos are being squeezed out. Taking their place:  reply-girl videos.

Related videos often bring in more money for the channel, because they’re populated with the channel’s other videos (or with partner videos).

The reply-girl videos, themselves, follow a simple formula: their breasts are in focus, their faces cut off mid-forehead. While the camera is focused on their assets, the girls talk about the video they are replying to. But what they say often makes little or no sense. Sometimes it’s blatantly clear the reply girl didn’t even watch the video she is responding to.

Their only goal is to get content featuring their boobs up as quickly as possible so their video will be viewed by as many people as possible. They’ve figured out how to game YouTube’s related videos system. They copy all of the tags on a popular video, guaranteeing their reply video will appear in the related videos section on the right hand side of the screen.

Each reply girl makes any where from five to 15 such videos a day.

YouTubers dislike these videos, giving them disproportionately high thumbs-down votes. But they also clearly work: Some of these videos can get millions of views. And on YouTube, views mean money. Many of these girls are part of YouTube’s Partner Program, meaning they share profits from ad revenue.

The “reply girl” phenomenon really took off last summer when one Canadian young woman named Alejandra Gaitan started the trend with her “thereplygirl” channel in July. Her videos have been viewed more than 12 million times. 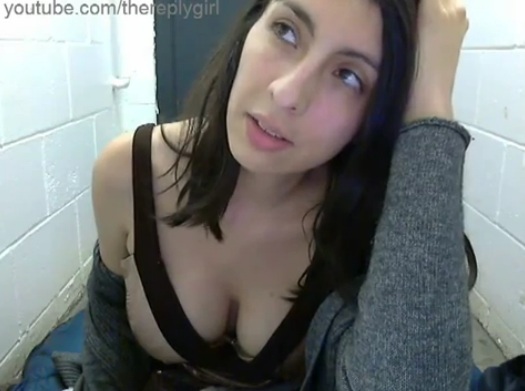 In a video interview with the YouTube channel lolpervs, done last week before the controversy intensified, thereplygirl, who is a native Spanish-speaker, said she turned to YouTube in the summer because she was living below the poverty line for seven years and “really wanted to make some money on my own.”

It’s obviously working, and more than a handful, even robots, have followed thereplygirl’s lead.

“We men can’t help ourselves,” said Skweezy in “RE: GIRLS THAT MAKE TERRIBLE RE: VIDEOS,” his February 15 video addressing the issue. “Titties are like venus fly traps for our dicks. We make one wrong click, and regret it instantly.”

Perhaps that’s why aside from sharing a link to Skweezy’s video, he has largely remained silent about the reply-girl videos that plague his related videos section.

Philip De Franco, who also draws his share of reply girls, also rose to YouTube celebrity-dom based on his thumbnails of sexy women. He commented briefly, negatively, on the reply girl issue in Dec. of 2011.

Another male YouTuber, DireBoris’, posted a kooky Russian video on the Reply Girls, where he called them “mother beeches” and said they make him “so mad.” His rant has been viewed more than 5 million times in less than a month, according to YouTube statistics.

In a Feb. 16 video called “Dear Reply Girls…,” YouTuber Benedict, of the YouTube channel Cup of Tea called the reply girls “the vultures and leechers of YouTube,” adding they’re “depressing because they have almost no dignity at all.

Yogscast, the well-known Minecraft video-game commentators on YouTube, made their first move against the reply girls on Jan. 31 when they changed the tags on their video to read “hate having to write new tags because of horrible cam whores copying them in order appear on the related videos.”

But the reply girls are not going down without a fight.

Forever faithful to their formula and unfazed by the slur, the reply girls copied those tags and responded to Yogscast’s video as they usually do.

Yesterday, Yogscast notched it up, appealing to their million strong user base in a post in which they say they’re losing money and views, as their related video game content (their videos are story arcs, and often shot in series), are no longer readily accessible.

The duo also accused the reply girls of violating YouTube’s community guidelines because their videos are tantamount to spam. They cited this passage in asking fans to flag the videos as spam:

“Do not create misleading descriptions, tags, titles or thumbnails in order to increase views. It’s not OK to post large amounts of untargeted, unwanted or repetitive content, including comments and private messages.”

At press time, the thread had over 800 responses. Some took it a step further and posted the private information of some of the reply girls or posted comments that could be viewed as cyberbullying. They were promptly banned from the Yogscast forum and their posts deleted. Other Yogscast forum users took to drafting a letter they would send to YouTube en masse addressing the flaw in the tagging and related videos algorithm. Others mentioned these videos were “causing the regression of the respect of women on the Internet.”

Hannah, a crew member and spokesperson for Yogscast, told the Daily Dot that they “asked our fans to remain as polite as possible and take it up directly with YouTube.” She declined to comment further.

The YouTube accounts of a couple of the young women identified as reply girls on Yogscast’s forum post have disappeared from YouTube since yesterday. It was not clear if they deleted them on their own or they were removed by YouTube.

But at least two reply girls say the campaign against them has resulted in bullying, hate, and even death threats.

Two of the biggest “reply girls,” thereplygirl and MeganSpeaks, have responded to the criticisms in video form.

In one video, thereplygirl says she’s received death threats and false DMCA notices, but compares herself to Rebecca Black. Her voice wavers a bit, and her eyes look like she’s been crying as she says “haters make me stronger” and “my videos follow absolutely all of the community guidelines.”

In a video uploaded yesterday titled “yogscast hates me,” thereplygirl says she’s received 300 new private messages telling her to “go kill yourself” before reiterating that her videos don’t violate community guidelines. “If you don’t like my videos, why do you watch them?,” she asks.

MeganSpeaks, the other top “reply girl,” has also made a few videos addressing her “haters.” Like “thereplygirl,” she, too, looks tired.

MeganSpeaks began her reply channel in August, and has amassed 36 million views on her videos. Her signature thumbnail is a bright fat arrow pointing to her chest. But in these videos, there are neither arrows nor cleavage.

“Hate, hate, hate, right now: I’m seeing a lot of it,” says MeganSpeaks in her video, over the strains of light, almost mournful, piano music. “I started this channel because, I wanted something a little bit more connecting to people” says MeganSpeaks. “People don’t realize that I am a person, I am a human being.”

In another video, she reminds the viewer she doesn’t just do reply videos but has other channels, including a gaming and music channel. “I do other things.”

Some YouTubers have decried Yogscast’s call to action, crying censorship.

One man who goes by BuddhaCharlie says Yogscast is acting like SOPA in trying to get the “reply girls banned.”

YouTube, which does not comment on individual partners or videos, has been silent on the matter. But as the backlash grows, the Google-owned company will be forced to do something, even if that is only the revamping of how related videos work.

If they don’t, YouTube could become an amateur softcore-porn forum filled with irrelevant links.