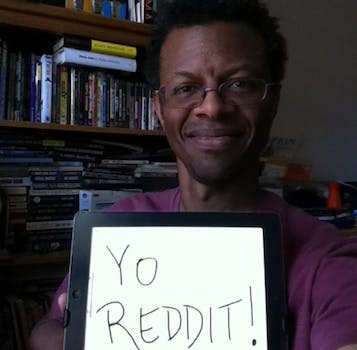 A big week for movie buffs at Reddit’s r/IAmA

Director William Friedkin and voice actor Phil LaMarr scored the most popular interviews on the social news site this week.

There are few things Reddit loves more than a pop culture jack-of-all-trades.

That was definitely the case this week, when voice actor (and regular actor) Phil LaMarr, the voice of Futurama’s Hermes, who’s also loaned his voice to Samurai Jack and Metal Gear Solid. He’s also in Pulp Fiction—you might remember him as Marvin, the guy who gets picked up by Vincent (John Travolta) and Jules (Samuel L. Jackson), then accidentally shot in the back of their car.

LaMarr shed a little light on that role:

The back story that Quentin and I talked about was that Marvin and Jules had people in common and when this briefcase thing went down Jules was able to get in touch w/ Marvin and offered these guys who were holed up, scared and obviously way out of their depth a way to resolve this. “All you have to do is make sure the door is unlocked at 7:45.” He didn’t know exactly how it was going to be resolved and he wasn’t street-smart enough to figure that the resolution might have a significant cost.

That wasn’t the only juicy trivia for film buffs. Director William Friedkin offered anecdotes from decades of influential filmmaking.

On The Exorcist:  “I don’t remember any incidents that were unusual. The one thing that did happen is that the entire set burned down one day. It took us almost [three] months to re-build it.”

Other popular Q&As included an update from Ridiculously Photogenic Surgery Girl and yet another discussion with a WWII vet.

1. Q. What’s your favorite “sweet something of someplace” line? (tcsuperstar)

Q. Who’s idea was it to film the chase scene in The French Connection without closing the streets? (blendenflecke)

A. It was my idea. It was very risky and I would never do it again.

3) IAmA heyheymse from AskHistorians, I have a degree in Ancient History with a specialty in Roman Sexuality. AMA!

A. Semen was thought of by Ancient Greek doctors as the life-essence of men. There weren’t a lot of advancements in medicine during the Roman times in terms of improvement over what the Greeks had done, so the Roman attitudes toward semen was similar. There wasn’t a lot of discussion of it as, like, an aspect of sex that was commonly fetishized, at least not that I’ve seen (though that doesn’t indicate that it didn’t happen!)

I freely admit that this is not something I have a load of knowledge about, so if anyone else has a better answer, then shoot. Just don’t be a jerk about it.

A. I do, and it’s scary. It’s like being the recipient of a voodoo doll.

5) I am a quintuplet. We are one of the first, fully surviving sets born in the US. Our medical bills in the first 2 years of life cost over $2.5 million, and several times after birth each of us almost died. AMA

A. Health insurance bills totaled over 2.5 million. We ended up being dropped by my parent’s insurance company after a couple of years. We were their most expensive client in history. My parent’s ended up having to search through over 100 insurance companies before they found one that would cover us. Even then, they only agreed to cover 3 of us since my brother and one sister had severe complications still. My parent’s had some big worries about bills from both their portion of the insurance and from buying food/clothes/diapers for all of us. The community really helped us out a lot, but we tried hard not to be a hand-out case.

Q. What was your honest opinion on the Japanese-American internment as a young man on the Pacific Front? Did you view Japanese-Americans as fellow Americans, potential threats, or were you indifferent either way?

Have you met any Japanese-American marines since? (int3rcept)

A. It was just one of those things, and you sort of think it was the right thing to do, but there’s something inside of you that sees those people getting out of their homes and you sort cringe. But it was a different time and you have to view it that way.
I never knew a Japanese-American marine. But before the war I grew up with several Japanses kids in Queens, so I thought they were swell.

Q. You had 60% of your lung removed, but you still took my breath away.
Edit: Aw shit three people did this already. (easye7)

A. Find something more original. I demand it!!!!!!