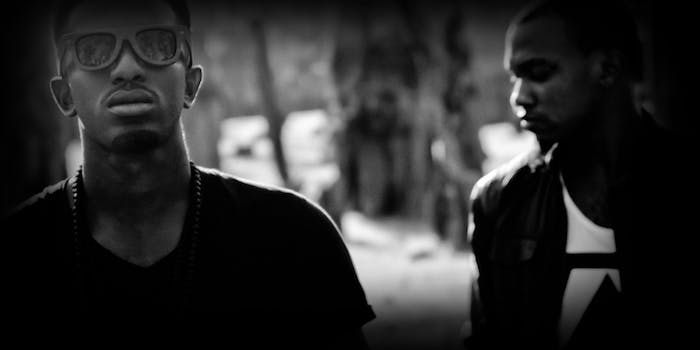 Supporters come to the aid of an independent rap duo that almost had its own music banned on YouTube over a copyright fight.

When independent rap artists After The Smoke found their song ripped off and posted on YouTube by a major label artist, they didn’t even need to turn to their Internet fans. Their fans, in fact, jumped into save them.

It all began over a year ago when the unsigned Tallahassee, Fla. rap duo released a song called “One In A Million” onto their page in Soundcloud,  which allows people to share sounds.

With a spacey, muffled beat that sounds like it could have been made by Odd Future producer Left Brain, the track was a minor hit, racking up nearly 45,000 plays. One of those plays came from Universal Music Group rapper Yelawolf, who told After The Smoke that he’d contribute a verse to the song.

At least that was the plan.

What actually happened was that Yelawolf took the track and ran, repurposing it for his own good by stripping the beat and incorporating verses from rappers Rittz, Big HUD, and Young Struggle—three members of Yelawolf’s Slumerican label, an imprint of Interscope Records. That version of the song, titled, “Far From a Bitch” and released earlier this week on DJ Iceberg’s High Life 4 mixtape, hit the Internet on January 13.

After The Smoke knew nothing about Yelawolf’s decision to release “Far From a Bitch” until yesterday, a few hours after After The Smoke posted its new music video for “One In A Million.” ATS producer Anthony X2 spoke with beatsperminute.com about the ensuing fallout:

“After a few hours of being up, [“One In A Million”] was removed and we got this email from YouTube,” they reported.

Video removed – Copyright Infringement
We have disabled the following material as a result of a third-party notification from UMG claiming that this material is infringing:
After The Smoke – OIAM
https://www.youtube.com/watch?v=ZBj2nmodCuA
Please Note: Repeat incidents of copyright infringement will result in the deletion of your account and all videos uploaded to that account.

So basically, After the Smoke got in trouble for posting its own song that Yelawolf ripped off.

Unethical? Yes. But UMG acted within the bounds of what it’s legally allowed to do. As After the Smoke quickly learned, Google (which owns YouTube) and Universal have an agreement that allows the label to “use a ‘Content Management System’ that can remove or ‘file block’ certain videos on the site if it finds them objectionable,” Time’s Techland reported December 16.

In layman’s terms, this agreement means that UMG maintains the rights to remove any video from YouTube that it sees fit for removal, and that the label does not need to provide any more explanation for the removal of such videos than what popped up in After The Smoke’s email inbox a few hours after posting their video.

It’s a raw deal for anybody who is not nestled under Universal’s protective blanket, a sentiment that Reddit users have been quick to note.

“This is insane,” wrote Reddit user takebacks, who opened the thread Tuesday evening. “Universal Music Group artist Yelawolf rapped over a song by ‘After The smoke’, without their permission, and leaked the track online. UMG then issued YouTube with a takedown notice for the original song, and Youtube complied.”

“Just gives you an idea of how thorough large companies are when trying to abide by the law and their own copyright,” wrote user Inukii. “When you work with things like copyright law and a legal system, You shouldn’t be lazy. You should be professional. This error just gets ‘Brushed aside’ as a little joke at the office though. They made a mistake. Do they care? Top of the food chain beech whales!”

The support didn’t end there. And in fact, there’s a happy ending.

As After The Smoke noted in a Tuesday Tumblr post, an overwhelming number fans sent emails to YouTube and UMG, and “One In A Million” was allowed to be reuploaded. The video currently sits at 1,772 views.

Odds are “some ignorant people are gonna be like ‘y’all stole yelawolfs beat’,” as YouTube user martinb5mvp wrote yesterday, but that’s no concern for After The Smoke’s. The chances of an independent group one-upping a major label like this again are “One In A Million.”