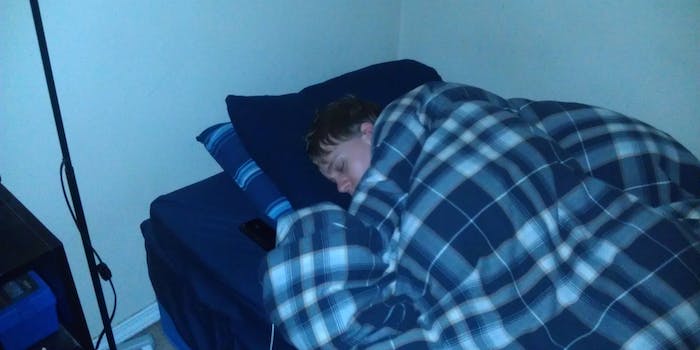 Reddit proves its uniqueness once again by highlighting a community centered around pictures of one man doing what we all do—sleeping.

Reddit users are voting on their favorite communities of the year, and an interesting place has slipped into the final round.

The subreddit r/picturesofiansleeping features nothing but pictures of a college student named Ian, sleeping.  It’s a dream for fetishistic sleep voyeurs, or just people who like taking part in weird little miasmic bubbles of Internet culture.

In about three months the place has attracted a few thousand “observers”—as the subreddit calls them—who react giddily whenever a new photograph is added and who dissect the minute details that change in Ian’s bed and sleeping position.

In some pictures, for instance, Ian’s face is visible; in others, he’s lost under his blue covers (he never seems to change them). Sometimes Ian’s girlfriend is there, too, sleeping next to him (she’s called simply “+” in the subreddit’s parlance, as in “Ian +1”). On a similar note used condoms have made a guest appearance on his bedstand.

One user drew a little sketch of Ian sleeping. Another responds to every photograph with haikus.

You’re probably thinking: “If Ian knew about all this, he’d probably call the cops, because goddamnit this shit is creepy.” But don’t worry. Ian does know about it, and he’s totally cool with it.

His roommate, who goes by whynotbeme2 on Reddit, takes the pictures with his permission.

“I didn’t care back then (and find it quite funny now),” Ian wrote on reddit in November.

And if you couldn’t guess from the above quote, Ian isn’t just aware of the subreddit. He takes part. In November of last year, he did an AMA (“ask me anything”) in the section. (He proved his identity with a handy picture and notecard with his reddit user name—his adoring fans recognized his mug immediately, even if his eyes were open.)

The AMA didn’t reveal that much beyond the fact that Ian seems a like a particularly good-natured guy. His girlfriend’s name is Alexa, he said, and she really doesn’t mind the pictures either. (We reached out to the guys for an interview, but didn’t hear back).

Even Ian’s family is on the somnial photography. His mother started posting pictures back around Christmas of last year. Maybe she was concerned that the Internet strangers who love seeing pictures of her son sleeping weren’t going to get their fix.

“I’d love to have heard how ian’s roommates convinced you to do this.” redditor ehsteve23 wrote.

She didn’t need much convincing, apparently. “I’ve been following for weeks,” she replied. “It’s been enlightening.”

Of all the adjectives she could use to describe r/picturesofiansleeping, “enlightening” is probably the most appropriate. Not so much for what it says about Ian or his roommate, but the community that’s spawned up around their weird little project.

“Oh, Ian,” redditor Anomander wrote in Reddit’s nomination thread. “Why are photos of you so oddly compelling?”

That raises an interesting question: Has the community attracted over 3,000 subscribers because of the pictures—because of Ian?

Or is it just a kind of ironic, dadaist game, played out in the form of a Web community?

“Why does this subreddit exist?!” redditor Lepricon wrote in the same thread, no doubt echoing the feelings of a great many first time visitors.

The fact is, there’s not really an answer to that question. That’s the whole point.