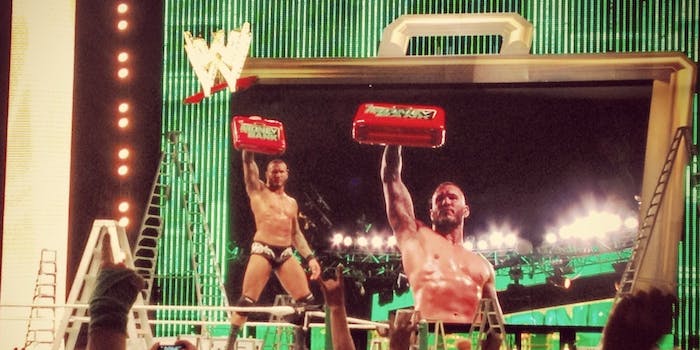 This redditor knows who’s going to win every WWE match

It's no secret pro wrestling is predetermined. But the WWE has a whistleblower on its hands.

A creative team lays out each show’s matches and events, deciding in advance who gets to walk away the winner. Each month, the WWE’s storylines culminate with massive pay-per-view events (PPVs). The company plays its cards close to the chest, trying to keep the scripts as secret as possible. And for the most part, it’s worked for years.

But the WWE has a whistleblower on its hands.

One redditor has gotten the WWE PPV results spot on for months. Since February, Dolphins1925 has gone 38 for 38 in getting the results matches right across five PPVs, including this week’s Money in the Bank show. This is no mere coincidence. The member of Reddit’s r/squaredcircle section claims to have an inside source at the company.

Deadspin notes Dolphins1925 typically posts predictions a few minutes before each PPV begins. The user claims to have “information from a source who has VERY credible inside information regarding the outcomes of the matches themselves.”

Dolphins1925 actually wants to expose leaks in the company’s management structure and stop spoilers from being leaked ahead of time.

“I feel that WWE owes the fans,” Dolphins1925 wrote. “They need to be more protective of the actual results as a fellow Redditor had stated in the thread. It is hurting the integrity of the product, and I should not have access to this information.”

The WWE shares scripts on a need-to-know basis, with writers withholding creative plans until the last minute from wrestlers. That hasn’t, according to Deadspin, stopped writers from leaking information themselves over the years, especially when there’s a storyline they dislike and want to indirectly veto it through a fan backlash.

For decades, insider newsletters and websites (or “dirt sheets”) have attempted to take fans closer to the action by publishing apparent behind-the-scenes information, often relating to upcoming storylines. Much of the time, the dirtsheets are off on their reports, due to inaccurate information or the WWE creative team changing plans.

Anybody wanna bet some money on the last few matches of #RAW? I’m feeling kinda lucky after visiting http://t.co/waiuU3JFPE earlier.

WWE employees have been aware of the user’s accurate predictions for at least the last month, according to wrestling news site ProWrestling.net. At the very least, redditors who believe they’ve caught the attention of company management are jokingly offering their suggestions for storylines.

It seems likely further measures will be installed to stop results of matches being leaked ahead of time.

“We may have a modern day Nostradamus on our hands,” the company said in a tongue-in-cheek statement to Deadspin. “We might have to monitor these posts in advance of our next pay-per-view to see how good he or she really is.”

The biggest secret is pro wrestling right now is not whether John Cena will be WWE Champion after Summerslam, but the identity of the person predicting outcomes Reddit’s pro wrestling hub.