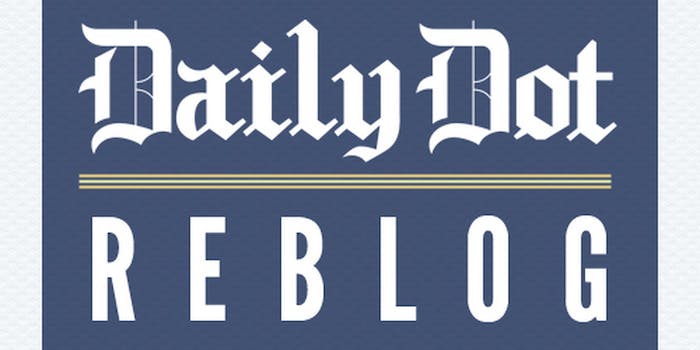 Thai floods, Benetton's kissing ads, censorship—and of course Ryan Gosling all make appearances on Tumblr this week. Hey girl, this one's for you.

When your Tumblr dashboard wasn’t being censored this week, you may have learned that a major retailer attempted to shock readers, that Thailand is submerged underwater and—get excited—that Ryan Gosling made another appearance.

So, lets dig into this week’s edition of Reblog, the Daily Dot’s take on the week that was in your Tumblrsphere.

We’ll start with that clever idea that Tumblr had on Wednesday to block out everything on your dashboard as a statement against censorship. Tumblr, along with other websites, is nervous that the Stop Online Privacy Act might infringe upon what you read online and encouraged people to call their representatives. It worked, as nearly 90,000 calls were placed to representatives, according to CNet.

Moving on, Benetton’s attempt at a new shocking ad campaign, called “Unhate,” heated up on Tumblr for its digitally-altered photos of President Obama kissing both Venezula’s leader Hugo Chavez and Chinese President Hu Jintao. One woman called the ads “offensive and disrespectful.” Or maybe she was just describing Benetton’s prices. Has anyone actually bought something from Benetton lately?

Thai Flood Hacks also caught our eye this week. The blog is a compilation of pictures of the devastating floods ravaging Thailand. Even the dogs are protecting themselves with these make-shift flotation devices.

We would love to see Ryan Gosling in a flotation device but this recent Tumblr, Typographer Ryan Gosling, will have to do. Playing off the “Hey girl” meme, Gosling now offers tips and encouragement with your typing. What a man!