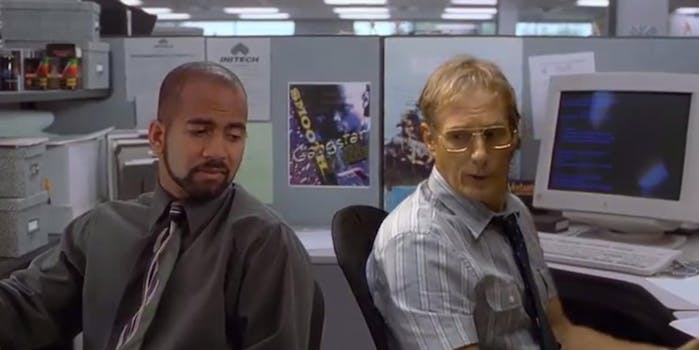 Nothing is better than watching the singer smash a printer to bits.

In 1999, comedic genius Mike Judge brought us the legendary film Office Space. The cult classic not only gave viewers a glimpse at the endless agony that comes with being trapped in a dead-end job, but it also showed us how painful it can be to have the same name as a popular musician.

So what would the film have been like if the legendary pop singer took on the roll of cubicle worker Michael Bolton? Finally, 16 years later, Funny or Die is here to show us.

The site managed to unearth some footage of when the famous singer tested for the film. From venting on camera about how frustrating it can be to share the same name as “that extremely talented ass-clown,” to smashing up a printer, the artist holds nothing back.

Then just when you think it can’t get any better, we get the ultimate treat as Bolton raps along to Scarface’s “No Tears” right before the credits roll. God bless you, Michael Bolton, and God bless Funny or Die!