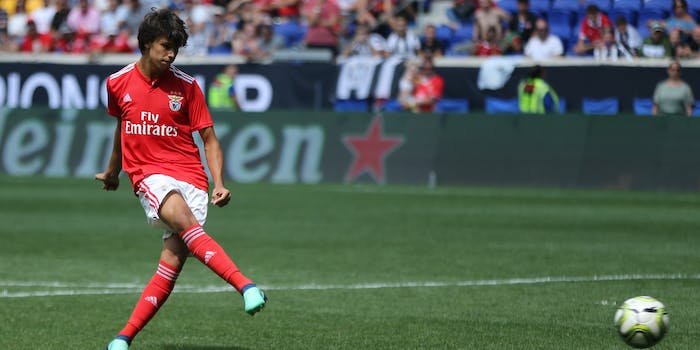 How to live stream Real Madrid vs. Atletico Madrid

New Jersey's an odd place for a Madrid Derby, but that's part of the magic of the International Champions Cup.

Real Madrid and Atletico Madrid both won their opening 2019 International Champions Cup matches via penalty kicks. In Real’s opener against Arsenal, Gareth Bale—who may be playing his last matches for Los Blancos—scored the first goal in a down-two-goals comeback, whereas Atleti couldn’t find the back of the neck, but hung tough against a Chivas offense pressing for a game-winner. Now, they’ll meet in a Madrid Derby a continent away from their usual settings; whoever wins will be in an excellent position to win the tournament, based solely on each of the 12 competing teams’ performances in three matches.

Here’s everything you need to know to watch Real Madrid vs. Atletico Madrid at the 2019 International Champions Cup.

The match is on both ESPN and ESPN Deportes. With a one-week free trial via all the services listed below, it provides an easy way to stream Real Madrid vs. Atletico Madrid and other International Champions Cup matches.

Spanish-speaking viewers have quite a few options. For bilingual families, you might consider the Español: Best of Spanish TV package for either Sling Orange or Sling Blue for 24/7 specialty channel La Liga TV and beIN SPORTS Connect: Channels 4-9, which features matches from La Liga, Ligue 1, and Copa del Rey, among others. Both packages cost $5 per month after your free trial. Sling TV Latino is another Spanish-language package for $10 per month, including NBC Universo, History en Español, and—of import to soccer fans—four beIN SPORTS channels. (And choosing Sling TV Latino + Sling Orange for $30 per month gives you access to ESPN Deportes.) For more information, check out our guide to Sling TV channels and our Sling TV review.

Real Madrid vs. Atletico Madrid at the International Champions Cup: Why it matters

The Madrid Derby is the most intriguing annual La Liga matchup not named El Clasico, and there’s the added bonus of the grudge fomented by the 2016 Champions League final, which Real won on penalty kicks after dueling to a 1-1 outcome. As a tune-up for the season to come, it’s simply fuel for fans and fun for neutrals that we get this rivalry as part of the International Champions Cup package.

But it’s a transitional time for both teams. Real comes off a terrible season by its lofty measures, and as the front office is wont to do, the club is bringing in reinforcements, including Eden Hazard from Chelsea and Luka Jovic from Eintracht Frankfurt. They’re also contemplating, if rumors are to be believed, offloading Gareth Bale as a prelude to other moves to get other Galacticos. Atleti, meanwhile, saw Antoine Griezmann, who made a big show of staying in red and white stripes just last year, leave for Barcelona. While Atletico is disputing the transfer—more likely to get more transfer fee compensation than actually bringing him back to Madrid—the club is also moving on.

Young Portuguese sensation João Félix has been given the No. 7 jersey; he may not have to deliver the goals that Griezmann did, since Atleti’s a team content to grind out 1-0 wins. (Or, in the case of their ICC opener, a 0-0 draw followed by some penalty kick sequence mettle.) They will look for him, however, to make up the marketability gap as they charge forward into a new season where Barcelona looms large.