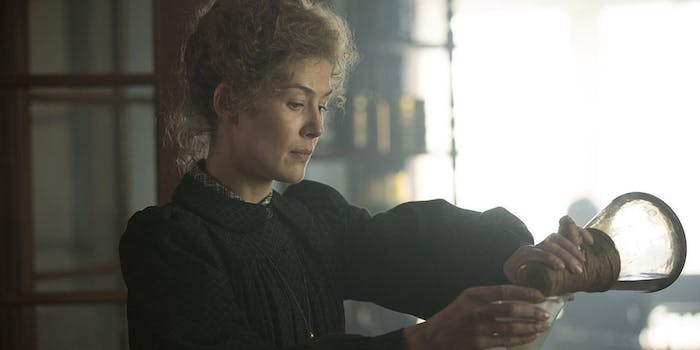 Another fascinating historical figure let down by a forgettable screenplay.

The only way Amazon Prime Video’s Marie Curie biopic could be more by-the-book is if it starred Benedict Cumberbatch. Directed by Marjane Satrapi (Persepolis) with a painfully straightforward screenplay by Jack Thorne (The Aeronauts), Radioactive follows the career of Nobel prize-winning chemist and physicist Marie Curie (Rosamund Pike). Working with her husband Pierre Curie (Sam Riley), she led world-changing research into radioactivity, eventually dying from radiation-related anemia as a result.

RELEASE DATE: July 24, 2020
DIRECTOR: Marjane Satrapi
STREAMING: Amazon Prime
Rosamund Pike stars in this formulaic biopic of Marie Curie, who changed the world with her research into radioactivity. Let down by a poor screenplay, it’s a shallow but watchable exploration of an interesting life.
Advertisement Hide

Curie (originally Maria Skłodowska, before she married her French husband Pierre) faces obvious obstacles as a female scientist working in 19th-century Paris. The academic establishment refuses to support her at the best of times, and she’s unwilling to make herself any softer or more palatable for their benefit. Pierre is the only one who takes her seriously, offering to share his lab as she works toward the discovery of a new element, radium. Their professional collaboration soon turns to love, a romance that neatly slots into the predictable narrative beats you find in mainstream biopics of this type.

Many viewers will recognize the main plot points of Curie’s life: the discoveries, the Nobel prize (scandalously awarded only to her husband), and her heavily-foreshadowed death. Radioactive fills in the gaps, offering a decent overview of her personal and professional struggles, the most unexpected element being the physicality of her research. During the process of discovering radium and polonium, she pounded tons of uraninite to dust: hefty physical labor to find something we now think of as ephemeral, the invisible terror of HBO’s Chernobyl miniseries. The film actually touches on Chernobyl, in fact. In between scenes from Curie’s life, we briefly visit future events illustrating the impact of her research. An interesting touch, although it skews more toward educational storytelling than stirring drama. While I’ve enjoyed Rosamund Pike’s work in the past, she doesn’t get an especially complex role here, and the supporting characters are largely one-note. I assume there’s a whole section in someone’s casting database purely dedicated to old white men who scold inspiring heroines for trying to Change The World.

Jack Thorne’s screenplay is the real letdown here. Much of his dialogue is undisguised exposition, with characters repeatedly stating the obvious. It also wins a prize for most utterances of the word “science” in one film. “This could change science forever!” exclaims Marie. “We already changed science forever!” replies her husband. And on, and on. Maybe things were different in the 19th century, but to modern ears it sounds pretty clumsy to have chemists and physicists refer to their work as “science” all the time, as if Thorne just forgot to replace a filler-word. This tracks with his previous work, which often feels like a first draft. He’s an extraordinarily successful screenwriter in the sense that he’s very prolific (six movies and three miniseries between 2019 and 2020), but I wouldn’t say his reputation inspires much excitement. In fact, when his name popped up in the end credits for Radioactive, my main thought was, “Well, that explains it.” As showrunner of His Dark Materials, he delivered a needlessly simplified and shallow adaptation of a brilliant book, and while I didn’t see The Aeronauts, it sounds like it was much in the same vein as Radioactive: “Women don’t belong in balloons!”

We know what to expect from this kind of biopic. Radioactive falls short of Oscar-bait status because it doesn’t lean into an intense, tormented performance from Pike, but it otherwise follows the same formula. And when you hit the right emotional cues and deliver a compelling protagonist, that formula works perfectly well. The problem here was the execution, letting down Marie Curie’s legacy with a weak screenplay.