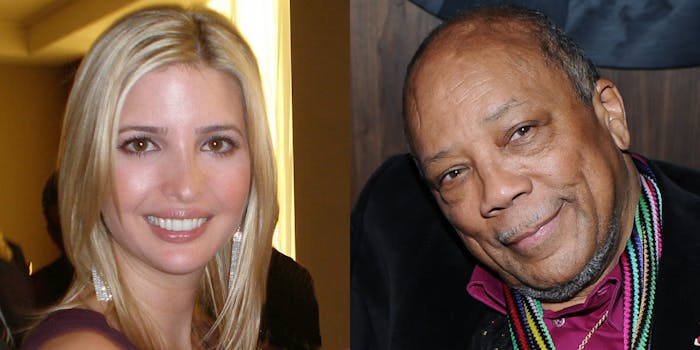 The celebrity gossip mill is in overdrive after music legend Quincy Jones spilled decades’ worth of tea in a candid interview with Vulture on Wednesday.

The 28-time Grammy winner has a Netflix documentary in the works, a CBS special hosted by Oprah Winfrey on the horizon, and apparently, he’s ready to share some of the personal opinions and Hollywood secrets he’s been holding onto all these years. (Marlon Brando slept with a lot of prominent male celebrities back in the day! Michael Jackson stole the melody to “Billie Jean”! Jimi Hendrix was too nervous to hang out with the cool kids!). The most relevant story to 2018, though, is probably the tale of a date he went on years ago with the president’s daughter and close advisor Ivanka Trump.

The interview jumps from topic to topic and covers a huge amount of ground in a short amount of time, which Jones credits to being a Pisces. During a discussion about how racism has evolved in his lifetime, Jones touches on the topic of our current president, which reminds him of his one-time date with Ivanka. According to Jones, the pair went out to dinner after being introduced by Tommy Hilfiger, and while he admits he was attracted to her, he ultimately decided she had the “wrong father.”

If you could snap your fingers and fix one problem in the country, what would it be?
Racism. I’ve been watching it a long time — the ’30s to now. We’ve come a long way but we’ve got a long way to go. The South has always been fucked up, but you know where you stand. The racism in the North is disguised. You never know where you stand. That’s why what’s happening now is good, because people are saying they are racists who didn’t used to say it. Now we know.

What’s stirred everything up? Is it all about Trumpism?
It’s Trump and uneducated rednecks. Trump is just telling them what they want to hear. I used to hang out with him. He’s a crazy motherfucker. Limited mentally — a megalomaniac, narcissistic. I can’t stand him. I used to date Ivanka, you know.

Wait, really?
Yes, sir. Twelve years ago. Tommy Hilfiger, who was working with my daughter Kidada (A former model and current designer, Kidada is the daughter of Jones and his ex-wife Peggy Lipton. Jones’s other daughter with Lipton is the actress Rashida Jones.) said, “Ivanka wants to have dinner with you.” I said, “No problem. She’s a fine motherfucker.” She had the most beautiful legs I ever saw in my life. Wrong father, though.

The entire interview continues on like that, with Jones flitting from topic to topic, casually dropping wild-sounding anecdotes and then moving on to the next reveal before anyone has time to catch up. After the Ivanka story, Jones pivots to whether Oprah would make a good president and they never look back.

Reactions have been all over the place on Twitter:

Quincy Jones: Michael Jackson was greedy. The Beatles sucked. Jimi Hendrix was afraid. Marlon Brando had sex with James Baldwin. Cyndi Lauper is a diva. U2 is over the hill. Tevin Campbell is underrated. Trump is an "idiot." And I used to date Ivanka. https://t.co/px9EmAkqEA

Quincy Jones says he “dated” Ivanka Trump when he was in his mid-70’s and she was in her mid-twenties. But as a lady who has had invitations to dinner misread: just because he thought it was a date doesn’t mean she did

Whether we’ll ever hear more about the date remains to be seen, but we’ve definitely learned one thing in all this: Quincy Jones has lived a truly wild life.