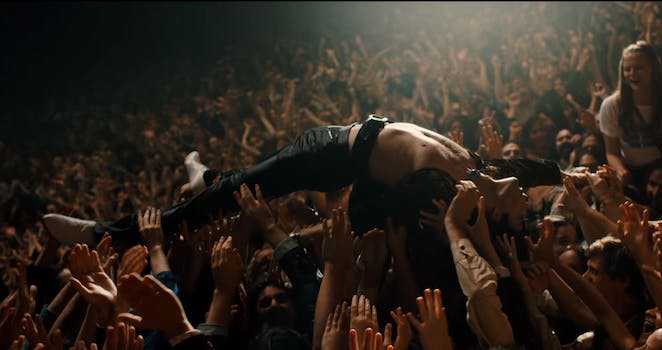 Queen gets the big-bang biopic the band deserves.

Freddy Mercury endures as one of rock’s greatest visionaries, and the long-rumored biopic about the Queen singer finally has a trailer. On Tuesday, 20th Century Fox released the Rami Malek-starring teaser for Bohemian Rhapsody, and it plays like an essential and classic Hollywood biopic. After Wayne’s World and Suicide Squad blasted Queen, it’s nice to see the arena titans come home to the silver screen.

About that clunky and weird mashup though…

Beginning with Mercury’s circa-Live at Wembley ’86 vocal improvisations, the trailer fails to let the band’s music breathe—instead blending obvious hits “Another One Bites the Dust,” “Killer Queen,” and “Bohemian Rhapsody” into one generic soundtrack. What is this, Love?

Gwilym Lee stands out as Brian May, the band’s guitarist and somehow-still-underrated secret weapon. (For starters, May bent his guitar to sound like every Dixieland instrument and stacked it all together on A Night At the Opera‘s gnarly “Good Company.”) The quartet is rounded out by Joseph Mazzello playing bassist John Deacon, who wrote “Another One Bites the Dust,” and Ben Hardy as drummer Roger Taylor.

Bryan Singer, the longtime director with a sexual assault history, was dismissed from the project and replaced at the helm with Dexter Fletcher (who directed Wild Bill and played Soap in Lock, Stock, and Two Smoking Barrels.)

To date and for the record, the best use of Queen on-screen is Observe and Report, which used News Of the World deep cut “It’s Late” to perfection during its ending credits. Bohemian Rhapsody looks poised to best that.