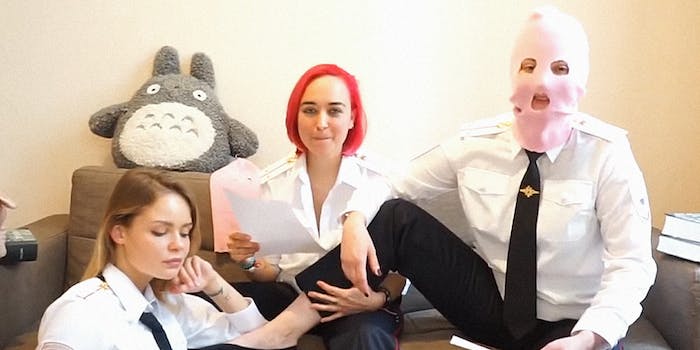 The band that interrupted the World Cup explains itself.

Pussy Riot, a Russian music group devoted to activism, claimed responsibility for the World Cup protest on Sunday that brought the title game to a stop after four of its associates stormed the field. Now the band is using its moment of international infamy to explain itself on Facebook.

Three women and one man dressed in police uniforms ran onto the field in the 52nd minute of play while an estimated audience of over 18 million watched on television in the U.S.

The band told the Daily Dot via Facebook that it was “quite easy” to get protesters onto the field after purchasing regular tickets into the match. The group explained that the four accused were “treated unfairly” while in custody: “They got no lawyer, no food, no sleep beds, no shower. The police only allowed food brought by their supporters to be passed to them after more than 6 hours of detainment.”

The group is taking full credit for the stunt and released a full statement about the protest on their official Facebook page moments after law enforcement ushered the four intruders off the field. Early Monday the group gave an update on the status of the four individuals and the reason behind the stunt.

The activists wrote that the stunt was a protest against Vladimir Putin’s Russia, in particular, its treatment of dissent and political prisoners.

“Updates on The Football Field Action.

1. Four Pussy Riot members spent the whole night at the police station (note that there are no conditions to sleep, eat, take a shower etc).
2. Activists have to be brought today to the court hearings, but the officials do not give us information where and when this process will take place.
3. The police does not let our lawyer, “Agora”‘s Nikolay Vasilyev, to see the detained activists, don’t let him talk to them. It’s against the law, everybody has a right to talk to a lawyer.
4. Misdemeanor cases. Activists are charged with 2 misdemeanor cases (up to 15 days of detention).
5. Possible criminal article. At least two sources in the police reported to the Russian press (RBC) that the officials initiated a legal procedure of checking whether the criminal case can be opened or not.

Just a reminder, with this action we’re demanding:

1. Let all political prisoners free. Free Oleg Sentsov.
2. Not imprison for “likes”.
3. Stop Illegal arrests on rallies.
4. Allow political competition in the country.
5. Not fabricate criminal accusations and not keep people in jails for no reason.”

According to the Daily Mail, the four protesters included “a model, a former BBC Russia employee, and the ex-husband of one of the group’s most prominent members” and the group faces up to 15 days in jail for the demonstration.

The activists remain in custody, the band says, and according to the group continues to ask for food while “waiting for the hearing to happen in a few hours.”

The team from Croatia seems to be the most vocal about the incident, claiming the stoppage of play hurt its chances at a comeback. The team was down 2-1 to France and eventually lost 4-2. Croatia defender Dejan Lovren even aided in helping officials apprehend one of the protesters.