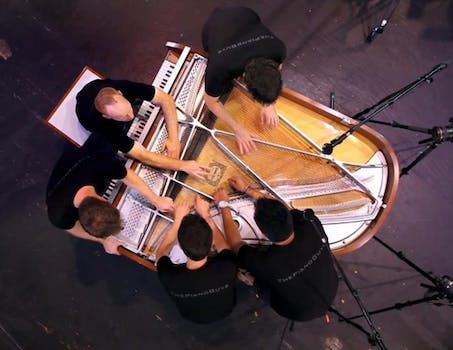 How do you catch the eyes of major music executives these days? Easy. Create a smash hit on YouTube.

The Piano Guys, five Mormon fathers with a YouTube channel that’s accumulated more than 135 million views and spawned a massive hit in this summer’s cover of One Direction’s “What Makes You Beautiful,” have signed with Sony Masterworks.

PSY, whose indispensable “Gangnam Style” has racked up more than 100 million views and basically turned the American perception of K-pop music on its end, inked a deal with manager Scooter Braun, who runs Schoolboy Records, manages Justin Bieber, and has worked with Carly Rae Jepsen. This morning, Korea’s Today Online reported that PSY has also signed with Island Def Jam, a subsidiary of Universal Records.

The Piano Guys announced their signing in a YouTube video posted to their channel this morning.

“We sat with these people and they were like, ‘We love what you guys do. We want to take it to the next level. Keep doing what you’re doing,'” keyboardist Jon Schmidt, 46, told the group’s fans.

“We’re five middle-aged guys with wives and kids who are desperately holding on to our hairlines,” cellist Steven Sharp Nelson, 35, told USA Today. “But we love what we do, and our fans say it shows.”

The group is currently set to release their self-titled debut Oct. 2.

PSY currently holds no plans to release his seventh album—sixth disc PSY’s Best 6th Part 1 just dropped in July— but he and Braun recently toasted to “breaking down barriers” and “the future” while visiting in California.

“We’ve come to an agreement to make some history together,” Braun said in a public announcement posted to YouTube Monday. “[To] be the first Korean artist to break a big record in the United States.”