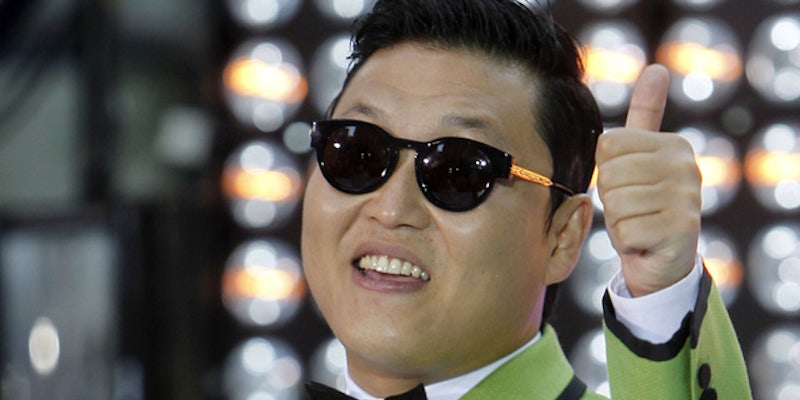 The “Anti-American” past of “Gangnam Style” rapper Psy

An unconfirmed statement from a protest concert in 2004 has everyone's favorite Internet rapper in hot water.

Last night, most of us went to bed in a world where pudgy Korean rapper and viral sensation Psy was globally beloved for bringing us “Gangnam Style,” the “Macarena” of 2012. But this morning we woke up to a different world — a colder, darker world — in which the internet was afire with the claim that Psy had performed at an anti-American concert in Seoul in 2004, where he rapped: “Kill those fucking Yankees who have been torturing Iraqi captives/Kill those fucking Yankees who ordered them to torture/Kill their daughters, mothers, daughters-in-law, and fathers/Kill them all slowly and painfully.”

This story — which is still unconfirmed — was first reported in English a few months ago on CNN’s citizen-reporting site iReport, where a self-described Korean-American writing under the byline “ausjeon” wrote that (all sic) “the worst thing that [Psy] has done to all Americans is this; Psy insulted American soldiers to an unbearable degree and talked about murdering all their families in his song.” Ausjeon then quoted the lyrics:

Pretty… refreshing, for those of us sick of ‘Gangnam Style’? (Is this how Psy becomes cool again?) The lyrics are from this song — “Dear America” by the South Korean rock band NEXT. We’ve been told that “Yankees,” the word used by the CNN iReporter, is more accurately translated as “a bad curse word like ‘assholes’ or ‘motherfuckers.'”

According to the Chosun Ilbo and several Korean-language music sites, NEXT, Psy, and other musicians jointly performed “Dear America” at a protest concert in 2004.

The concert was held after the decapitation of Korean missionary by Islamic militants in Iraq helped crystallize anti-U.S. military sentiment in South Korea. Two years earlier, two American soldiers had been acquitted of negligent homicide in the case of two 13-year-old Korean girls who were struck and killed by an American military vehicle. At the time, Psy was “among the most outspoken” pop stars in protesting the acquittal and the U.S. status of forces military agreement, according Korea Times (as quoted in Busan Haps); a YouTube video of Psy, face painted gold, smashing a miniature American tank model during a 2002 concert, was recently removed over “copyright claims.”

Despite the virulence, Psy’s anti-Americanism — more accurately, anti-militarism — has never been too far from mainstream Korean opinion. Busan Haps’ Bobby McGill, who has the most in-depth article about the controversy, points to a 2002 Gallup poll that “showed 75 percent of Koreans in their 20s said they disliked Americans. Sixty-seven percent in their 30s, along with half of those in their 40s, told Gallup they either ‘did not like’ or ‘hated’ the United States.” He further contextualizes:

Few living on the peninsula at that time [2002] were immune to the movement. Businesses around the country banned Americans (and by association, Westerners) from entering, US flags were laid on the ground at university campuses allowing students to walk on them en route to class, and graphic banners of Shim Mi-son and Shin Hyo-sun were erected at rallies, as the American military came under increasingly heated scrutiny for what was ubiquitously viewed as an unfair and unjustified handling of their deaths.

[In 2004 m]assive protests erupted across South Korea with thousands rallying against Muslim extremists, as well as Seoul’s plans to send troops to Iraq. And while most of the peninsula’s fury was directed towards terrorists in Iraq as well as Korean government policy, some anti-US military protesters seized the moment to put forth their cause.

But, you know, who cares about nuance? Michelle Malkin’s right-wing Twitter aggregation site Twitchy is all over the story (MEDIA FAILS TO ASK FUNNY RAPPER ABOUT WHY HE HATES TROOPS) and there’s already a petition demanding that the Obamas “rescind invite to Gangnam Style rapper PSY to perform for Pres. Obama at Christmas party over troop killing song lyrics.” Psy and his new manager Scooter Braun — whom he shares with Justin Bieber and Carly Rae Jepsen — havent’ commented. We’ll update as we learn more.

Update: Psy has apologized, via the following statement:

“As a proud South Korean who was educated in the United States and lived there for a very significant part of my life, I understand the sacrifices American servicemen and women have made to protect freedom and democracy in my country and around the world. The song I featured on in question from eight years ago –- was part of a deeply emotional reaction to the war in Iraq and the killing of two Korean schoolgirls that was part of the overall antiwar sentiment shared by others around the world at that time. While I’m grateful for the freedom to express one’s self, I’ve learned there are limits to what language is appropriate and I’m deeply sorry for how these lyrics could be interpreted. I will forever be sorry for any pain I have caused by those words.

“I have been honored to perform in front of American soldiers in recent months -– including an appearance on the Jay Leno show specifically for them — and I hope they and all Americans can accept my apology. While it’s important that we express our opinions, I deeply regret the inflammatory and inappropriate language I used to do so. In my music, I try to give people a release, a reason to smile. I have learned that thru music, our universal language we can all come together as a culture of humanity and I hope that you will accept my apology.”