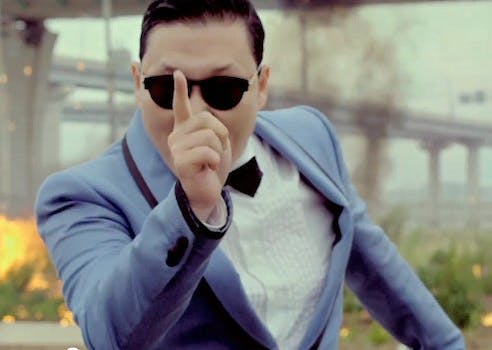 There’s a new king in YouTube-ville. K-pop sensation PSY’s smash-hit “Gangnam Style” is now officially the most viewed video of all time.

Bieber’s 2010 hit now falls down to second on the all-time list—despite concerted effort from a team of rogue Beliebers—where it comfortably sits more than 180 million views above Jennifer Lopez’s “On the Floor,” Eminem’s “Love the Way You Lie,” and LMFAO’s “Party Rock Anthem.”

PSY’s ascent through the YouTube ranks was swift and steady. Posted July 15, “Gangnam Style racked up nine million views before hitting United States airwaves in late July, where it quickly became the most popular and eventually overplayed song on the Internet.

Since, it’s inspired countless parodies, been proven to pacify toddlers, and even made its way into the Guinness World Record books. It’s been used at weddings and spawned retroactive think-pieces.

It is simply everywhere, and I currently have only one friend who has yet to hear the song. (He lives in Namibia.)

Alright, so first place. Nowhere to go but down, PSY.  The world now anxiously awaits your follow-up smash.

And I anxiously await a day in which we can talk about something else.