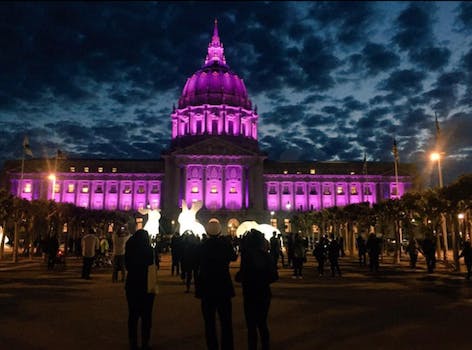 Photo via City of SanFrancisco/Twitter

‘Hamilton’ cast, Minnesota Twins, and other fans of Prince celebrate his life and legacy

The tributes are continuing to pour in.

The tributes continue to pour in as the world mourns the loss of Prince, who died Thursday at the age of 57. Artists quickly posted their tributes and fans looked back at his music catalog as the day went on, but once the sun went down, the world turned purple.

The Minnesota Twins, Prince’s home-state baseball team, turned Target Field purple for him and noted the appropriateness of it raining in Minneapolis. The Twins ended up winning their game Thursday night, 8-1.

Fitting that it's raining in Minneapolis today. pic.twitter.com/s5KFurDhHi

Cities all over the United States lit up iconic buildings for Prince. From New Orleans’s Superdome to city halls, bridges, and stadiums, the country became a little bit more colorful on Thursday night.

"Dearly beloved, we are gathered here today to get through this thing called life"…#RIPPrince pic.twitter.com/22t56HtBuk

The Hi-Level Bridge at the Waterfront turned purple in honor of #Prince pic.twitter.com/brSG8xV4g8

35W Bridge in #Minneapolis is purple tonight in honor of @prince! #RIPPrince pic.twitter.com/6pL75EBh0Z

Chicago skyline lights up in purple tonight to honor the memory of Prince. pic.twitter.com/Xc8lPlXSfW

Tonight we honor The Purple One. pic.twitter.com/8cR5k6ABHr

Looks like the RJ Corman Bridge in Clarksville is lit up purple tonight in honor of the late and great Prince pic.twitter.com/98qzmB01uM

But while photos of the Eiffel Tower and the Empire State Building in purple have also circulated online, those appear to have been doctored.

Spike Lee, meanwhile, held a block party in Brooklyn as tribute to Prince. Fans gathered—many of them dressed in purple—to mourn, but they were also there to commemorate Prince’s life and music, with Lee dancing alongside them as they celebrated like it was 1999.

Broadway also produce tributes to Prince. After Thursday night’s performance of The Color Purple, the cast—led by star Jennifer Hudson—assembled to lead a performance of “Purple Rain.”

The cast of Hamilton also led a tribute of their own. Lin-Manuel Miranda spoke to the crowd after the curtain call before everyone broke out dancing to “Let’s Go Crazy.” Miranda later tweeted that Alex Lacamoire, the show’s musical director, spent Thursday charting the song for the orchestra.

You can always see the sun, day or night pic.twitter.com/4fDo9PlcOb

Are we gonna let the elevator break us down?
(Oh no let's go) pic.twitter.com/8KL5DeW0FB

The Late Show stage lit up in purple as Stephen Colbert and Jon Batiste—who once worked with Prince—paid tribute to the artist.

A Prince tribute even ended up on the morning news. As Fox 5 Atlanta meteorologist Joanne Feldman did the weather report this morning, the storm coming into the area was purple instead of its usual colors.

And many newspapers led their Friday editions with Prince, with the New Yorker releasing a special cover for Prince in its upcoming issue.

In honor of Prince, an early look at next week's cover, "Purple Rain": https://t.co/lF0Nwyd7q8 pic.twitter.com/myN15OxsCO

As Prince proclaimed, we’re all gathered here for this little thing called life.