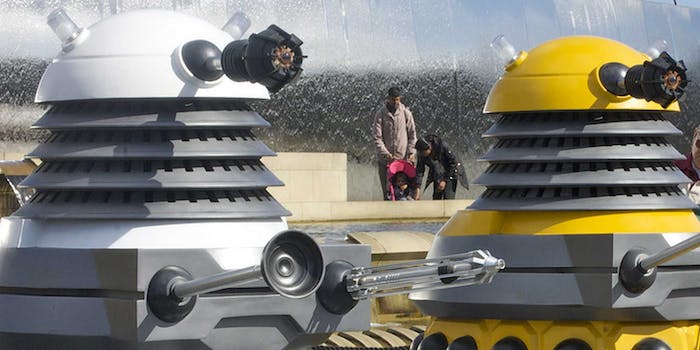 In what might be the most British thing to ever happen, Prince Charles imitated a Dalek during a tour on the set of long-running BBC series Doctor Who.

The prince, flanked by his wife Camilla Duchess of Cornwall, picked up a voice modulating microphone and uttered the villain’s catchphrase: “Exterminate” as well as a Christmas greeting which sounded ridiculous coming from the robot-voiced Dalek.

The royals visited the show’s Cardiff studio this week in anticipation of Doctor Who’s massive 50th Anniversary Special which will reportedly feature every incarnation of the beloved Time Lord. Even Prince Charles couldn’t resist asking for spoilers; When he met current Doctor Matt Smith and his companion, played by Jenna Louise Coleman, he asked about the storyline for the upcoming special. Coleman said she didn’t get details away, even to a royal.

That’s right. Prince Charles is a diehard Whovian, who said he’s watched the show since he was 15 years old. And even he couldn’t get any spoilers.