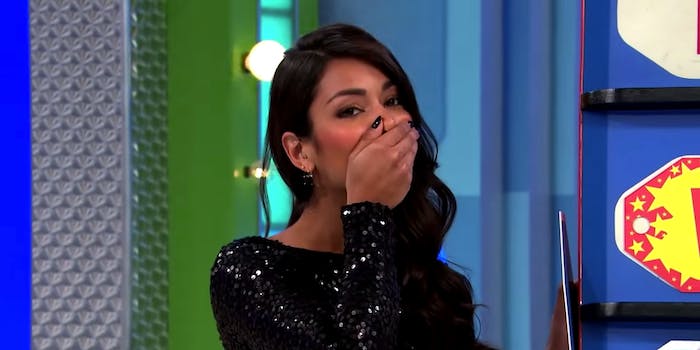 That's one way to win on the show.

Everyone makes mistakes on the job, but that usually doesn’t involve accidentally giving away a $22,000 car.

But that’s what happened on Thursday’s episode of The Price Is Right. Drew Carey had a contestant named Andrea on stage to play for a chance to win a brand-new auto by trying to guess the cost from a selection of five price tags. After getting one answer wrong, Manuela Arbelaez, one of the show’s models, revealed another price tag before Andrea had chance to guess again.

Arbelaez was mortified by her mistake on the show, but fortunately for the contestant, The Price Is Right ended up giving Andrea the new car anyway. The show’s shooting schedule takes place months in advance, so she had plenty of time to recover before the episode aired.

By the time the clip started going viral, she was in good spirits about the whole thing and even made jokes.

Sometimes you wake up and feel like giving someone a car! #PriceIsRight

For those of you asking: the producers and @DrewFromTV couldn't have been more supportive and understanding. I'm not in trouble :) phew!

Hey @Oprah now I know what it feels like to be you! Whenever you feel like giving cars away on the show let me know. @PriceIsRight

After that, however, she’s probably a lot more cautious about making the price reveal onstage.

H/T CNBC | Screengrab via The Price Is Right/YouTube