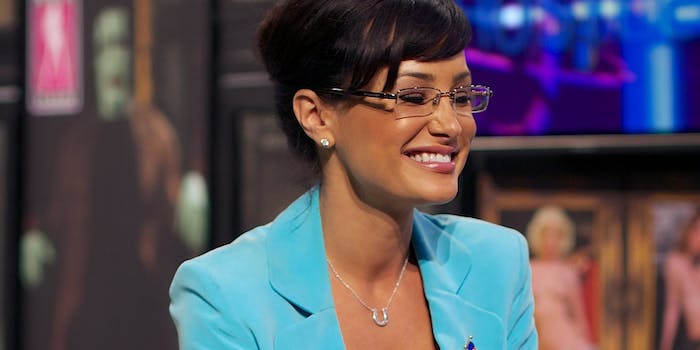 Sex and the Super Bowl have a long-standing relationship. It’s why gentlemen’s clubs in host cities face a “stripper shortage” every year, forcing them to hire additional staff to meet increased demand. It’s why the Super Bowl sex-trafficking myth is so widely circulated by the media every year (regardless of the inconvenient fact that it’s not actually true). And it’s why one of the more inexplicable questions geared at Richard Sherman during Media Day this year focused on the trend of athletes “making it rain” on exotic dancers after the games.

Last night, I attended the Super Bowl party at Headquarters NYC, a gentlemen’s club in midtown Manhattan. Hosted by adult-film mainstays Britney Shannon, Jayden Jaymes, and Lisa Ann, the HQ NYC Super Bowl party was touted as an intimate affair where fans could sit with their favorite performers, eat wings, sip Bud Light, and talk about “the plays, commercials, and everything that is going on in the game.” The flyers promised a special karaoke halftime show and a Pat Benatar performance from Lisa Ann. 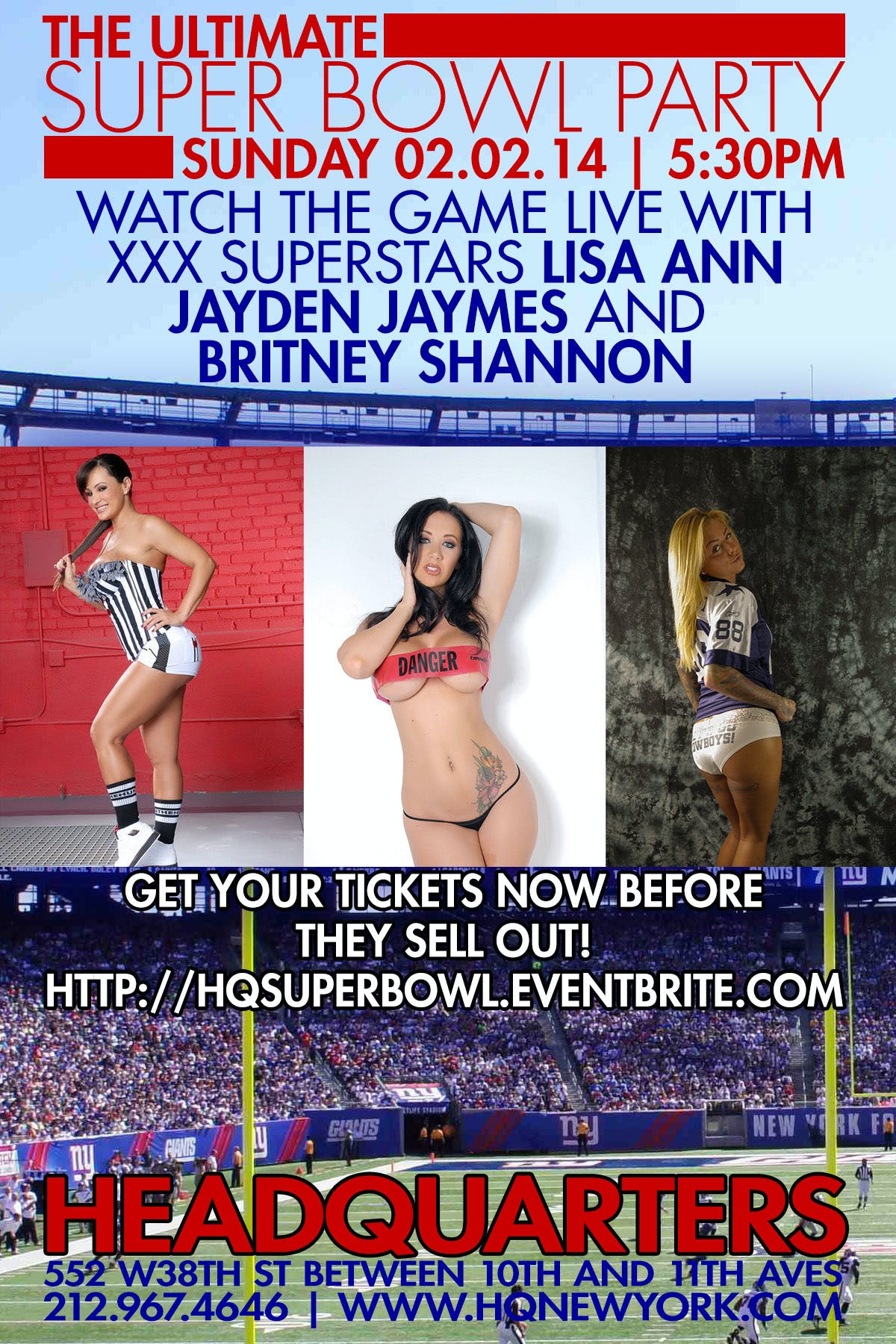 But while most of these fetes are attended exclusively by VIP athletes, club staff, and industry members, this was the first time Headquarters had opened its doors to the unwashed, non-porn hoi polloi like me. 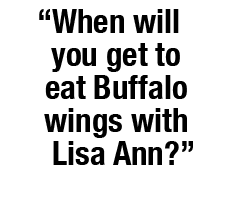 “In the adult industry these days, the No. 1 most important thing is the fanbase,” Speiser explained. “You really have to connect with the fans more than any kind of entertainer, and being out there and being accessible to fans is really important. So this party is about guys who wanna watch the game and really interact with the girls who are hosting. And when will you get to eat Buffalo wings with Lisa Ann?”

I had only been to one gentlemen’s club before—my boyfriend likes to refer to the lap dance I received there as the “most flaccid moment” of his adult life—so I assumed the place would be teeming with adult stars and dancers tottering around on stilettos, sprawling on your lap, and persuading you into blowing a hundo on a dance. There might be talk about their kids or their comp-sci night classes. I was very excited about this.

When I arrived, Headquarters was about a quarter full, and there were few dancers or performers to be found; while it was as dimly lit and plush-boothed as any platonic conception of a gentlemen’s club, the atmosphere was fairly laid back. The only pole in sight was being used as an impromptu mode of support for a tipsy older woman tossing back Heinekens.

After a few minutes, I spotted two adult performers putting on makeup in the women’s room: a blonde in a tiny, cropped Peyton Manning jersey and an angel-faced, impossibly lithe brunette in a black crop top and liquid leggings. She rustled through a tackle box of liquid liners and shadows.

“It’s like, now I’ve seen success and he wants to talk to me?” the blonde said. “I’m like, I’m a fuckin’ lady, what makes you think I’m gonna fuckin’ talk to you?”

“Right,” the brunette said. “OK. Whoa.” They continued applying their makeup. The sign above them read “Dancers: ‘Please’ do not throw any woman products in the toilet.”

As the game started, I milled around the room, trying to gauge the demographics of the room. Stockbroker types puffing e-cigarettes and wearing Brooks Brothers sweaters over collared shirts mingled with hard-bitten 50-something men you might spot in southern Pennsylvania. Some were members of the industry, like J-Lingo, a photographer who told me a psychic had prophesied a Seahawks win and who looked like a younger, more jovial Charles Barkley; some were off-duty HQ dancers, one of whom said she was trying to decide between rooting for “the birds and the horses.” In unison, her friends replied, “Woooo!”

During halftime, the performers started to make the rounds of the general section, making idle chit-chat and posing for photographs with fellow industry members. In lieu of the karaoke half-time show, Lisa Ann posed for photos with other stars and a handful of fans, most of whom skewed on the younger side.

The tattooed blonde and willowy brunette I’d seen in the bathroom turned out to be performers Britney Shannon and Kendall Karson. They stood together in back.

“We’re both actually rooting for the Broncos but it’s not looking good,” Shannon said. “I hope they pick it up after halftime. They need that coach’s lecture in the locker room right now.”

“Peyton Manning’s really good at coming back, though,” Shannon said. “I think this year he set a record for the biggest comebacks. I forget which game it was and who they’re playing, but they were, like, 40 points down and they won the game.”

I asked Karson why she thought people were watching the game here rather than at home or at a bar. “Well, what guy doesn’t love beautiful women and sports?” Karson said. “Put them both together and you have a great party.” They looked as if they’d rather have their eyelashes plucked off one by one than speak to anyone other than each other, so I thanked them and drifted away.

During the third quarter, as the game turned into a nightmare for Broncos fans, I realized my dreams of challenging porn’s most famous Sarah Palin imitator to a wing-eating competition had also been shot to hell. (It was also clear that my credit card had been swiped, but that’s another story.) If someone had wandered into the bar to get a taste of the American experience of sports and sex, as Liam from New Zealand had, they were going to get a dose of one and not so much of the other.

At no time was this more apparent than when I finally made it to the VIP area. As I introduced myself to Jaymes, Lisa Ann, and Byrd, I felt a little bit like a newly inaugurated member of homecoming court, taking my place onstage with the other victors.

“Who are you guys gunning for right now?” I asked.

“Well, I’m kinda hoping Peyton would get a win because I wanted him to retire on a high note,” she said. “But I have four fantasy players on the team on Seattle’s defense, so I’m quite happy with whatever happens.”

“What do you think about the party?” I asked. “Have you guys talked to any—”

“Can I watch the game now?” Lisa Ann said, her gaze abruptly shifting to her phone. An expertly manicured nail pointed to the screen.

I left the VIP area and made my way back into the crowd. Although the party was slated to go on until 2am, and a man who told me he worked for the NFL Network had promised to introduce me to some professional football players, the buffet had run out of chicken wings and the buzz had started to wear off from my one $15 cocktail. I was tired and hungry, and my credit card was missing from my bag. I had to call Chase Bank before someone bought a laptop in my name.

Toward the end of the fourth quarter, I went home. I’d experienced the Super Bowl with a side of sex, and that was enough. It seemed most of the guests felt the same way. The crowd in the main area had thinned considerably, and those who had paid for VIP access had disappeared to an ambiguous location upstairs. It was time to sit at home, snark about the halftime show, and stuff my piehole in peace.

And next year, I’ll be watching The Sound of Music.