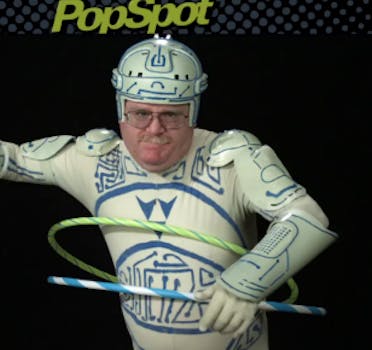 Watch the viral stars of ROFLcon in super slo-mo

You've never seen Tron Guy or Leeroy Jenkins like this before.

Who doesn’t want to see the millisecond-by-millisecond trajectory of viral star Tron Guy Jay Maynard’s belly as he twirls a hula hoop?

This past weekend at ROFLcon, Internet video makers PopSpot Video plucked away the assembled Internet celebrities to a small room on Massachusetts Institute of Technology’s campus. There, facing lights and a platoon of attendants, the stars posed, made faces, jumped around, and battled each other with toy weapons as a camera filmed them at 1,000 frames per second. (When I checked out the room, Chuck Testa was smacking double rainbow guy Paul Vasquez in the face with a toy mace.)

PopStart’s founder is Woody Thompson. He’s also the creator of  VH1’s Pop-Up videos and this new venture, unsurprisingly, gives the same treatment to viral videos. As a ROFLcon sponsor this year, PopStart is recording each of the conferences 35 panels, ensuring that all the Internet gathered this weekend at MIT will perpetuate on YouTube for posterity.