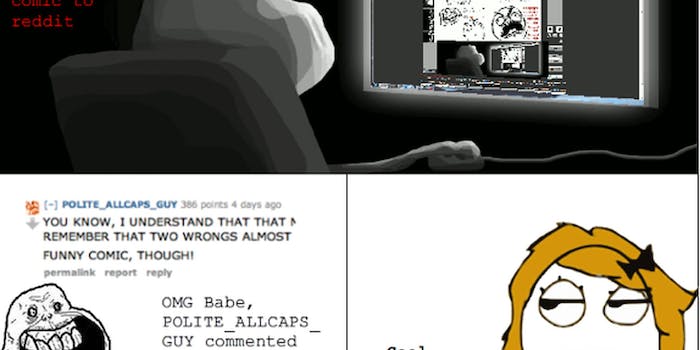 Politeness locks in path to fame

How POLITE_ALLCAPS_GUY became a Reddit celebrity in just four months.

What does it take to be an Internet celebrity?

It turns out, you just need to be polite.

Redditor POLITE_ALLCAPS_GUY made his name by doing exactly what it implies: he only replies in caps lock (usually a way to yell online), and always quite politely (with a tad of erudition and humor to top it off).

“HEY, FRIEND!” he often begins his posts. He peppers his responses with the unusual niceties, even when he’s being critical, like “I’M SURE YOU KNOW THIS AND ARE JUST TRYING OUT A DIFFERENT STRATEGY FOR YOUR OWN (I’M SURE VERY GOOD) REASONS…” And he’s known to finish his oh-so-gentle criticisms with phrases like “I COULD BE WRONG, THOUGH.”

That seemingly simple strategy has paid off big.

POLITE_ALLCAPS_GUY has already garnered 65,000 comment karma, the site’s internal reward system. Only 474 people have more comment karma than this — out of nearly 300,000 active users. And he’s done this in only four months — on a site that’s been around for nearly six years.

He’s so popular that some redditors have already created novelty accounts, or  joke accounts, based off POLITE_ALLCAPS_GUY, such as RACIST_ALLCAPS_GUY. And he’s had to deal with at least one impostor, POLITE_ALL_CAPS_GUY (a single underscore changes your whole identity on Reddit).

He’s even been the feature of a rage comic (Reddit’s popular user-generated comics) that opined on the meaning of celebrity, albeit in a typical rage-comic manner.

So who is POLITE_ALLCAPS_GUY? What does he think of all the attention? And does he speak in ALLCAPS in real life?

We had a digital sit-down via Reddit messages with POLITE_ALLCAPS_GUY, where we discussed celebrity, politeness, and that damned caps lock button.

See the Q&A for all his polite answers.