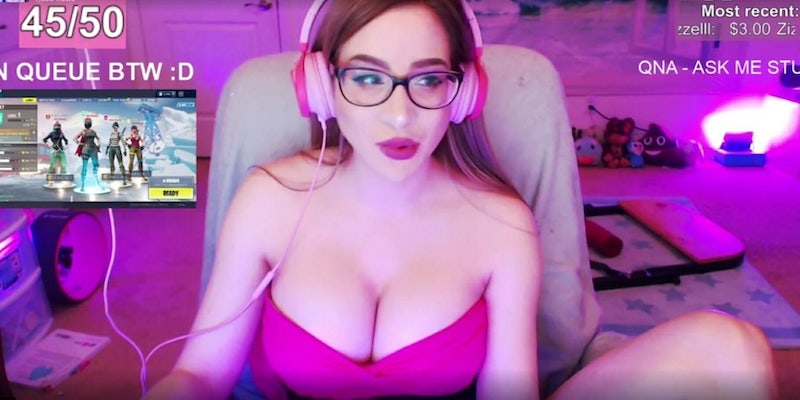 Twitch streamer Pink_Sparkles is immensely popular with nearly 700,000 followers and more than 20 million total views. But some apparently don’t feel like she belongs—whether it’s because she’s simply a woman on a gaming site or because she once talked about her breasts. In other words, it’s because she’s a woman.

Now Pink_Sparkles is lashing out against those who wish she weren’t a streamer. During a Q&A session on a recent stream, she was asked what bothers her about her being well known on the platform.

“One thing that kind of triggers me—and I probably shouldn’t tell you this—is when people say shit like, ‘You don’t belong on Twitch,’ or ‘This isn’t what Twitch is supposed to be” or … ‘Twitch is a gaming website online,’” she said. “Like you decide who belongs on Twitch and who doesn’t, like you’re the master creators or some shit. People are so damn obsessive. If you don’t fucking like it, then get the fuck off the website and go watch My Little Pony or some shit. Like seriously, no one gives a shit about your opinion.”

Pink_Sparkles finds herself in a similar predicament as other well-known female Twitch streamers. Alinity Divine has feuded with YouTube mega-star PewDiePie over so-called Twitch thots, a derogatory term used against women on the site. Ninja, one of the most popular streamers on Twitch, said he wouldn’t game against women because he didn’t want to be accused of flirting or cheating on his wife, despite the fact that gaming or working with the opposite sex does not require you flirt or fool around with them. And Lucia OmNomNom was harassed after she accidentally took off her shirt when she thought she wasn’t broadcasting anymore.

In the past, Twitch has said it’s taking action as fast as it can against misogynistic abuse. Many women and people of color, though, say Twitch is not acting fast enough.