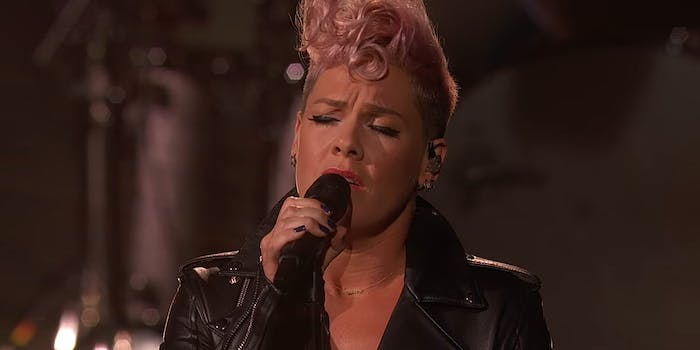 She took issue with his comments about women needing to 'step up' in the music industry.

Pink is adding her voice to the growing criticism of Recording Academy president Neil Portnow’s comments that women need to “step up” to be part of the music industry.

Portnow’s now-infamous musings were a response to critics saying that there wasn’t enough female representation at the Grammys Sunday night; Alessia Cara was the only woman to win a solo Grammy during the ceremony. He put the burden of women becoming a bigger part of the music industry on women instead of acknowledging the larger problem of institutional sexism that makes it hard to even break into the industry.

Pink, however, was having none of it. She posted a handwritten note to Twitter explaining just how long women have stepped up in the music industry (answer: since the beginning of time); she even used two different colored pens to emphasize her point.

“Women in music don’t need to ‘step up’—women have been stepping since the beginning of time. Stepping up, and also stepping aside. Women OWNED music this year. They’ve been KILLING IT. And every year before this. When we celebrate and honor the talent and accomplishments of women, and how much women STEP UP every year, and how much women STEP UP every year, against all odds, we show the next generation of women and girls and boys and men what it means to be equal, and what it looks like to be fair.”

She wasn’t the only artist who also spoke out against Portnow’s comments. Sheryl Crow suggested that the Grammys return to female and male categories for recording artists.

I wish the #Grammys would return to female/male categories. Who will young girls be inspired by to pick up a guitar and rock when most every category is filled with men? I'm not sure it is about women needing to “step up”, (as said by the male in charge). #GrammysSoMale https://t.co/v1rvbT3pCC

ugh bout 2 step up on 2 ur face.. women are making AMAZING music right now wtf is this dude talking about ????? https://t.co/EkijTA33QW

A recent study from USC Annenberg demonstrates that women are severely underrepresented in the music industry, with women making up only 9.3 percent of Grammy nominees in the top five categories—record of the year, album of the year, song of the year, best new artist, and producer of the year—over the past five years. Critics have also pointed to the Grammys reportedly not offering Album of the Year nominee Lorde a solo performance despite giving the opportunity to several of her fellow male nominees. Also, Pink was nominated for best pop solo performance alongside Kelly Clarkson, Lady Gaga, Kesha, and Ed Sheeran. Sheeran was the only male nominee but he won the category—and he didn’t show up to accept it.