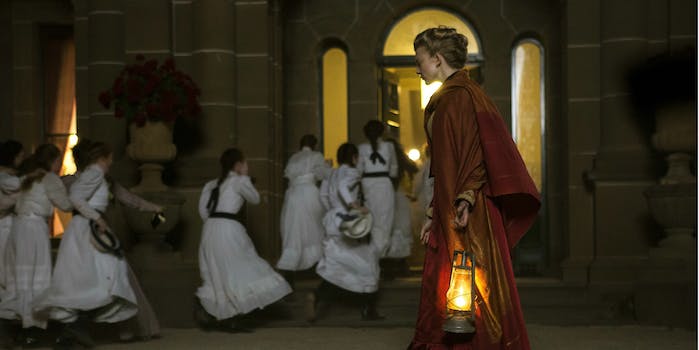 ‘Picnic at Hanging Rock’ is a captivating mashup of genres

Picnic at Hanging Rock, the latest miniseries from Amazon Prime, has a lot to juggle over the course of six episodes. A co-production between Australia and the U.S., the show seesaws between genres and tones, all while trying to honor its source material and say something about the times we live in.

Based on the 1967 novel by Joan Lindsay, cinephiles will likely be familiar with Picnic at Hanging Rock from Peter Weir’s 1975 adaptation of the same name. Both versions focus on the disappearance of a group of students and a governess from an Australian girls school called Appleyard College during a picnic on Valentine’s Day, 1900. Where the miniseries and the film diverge is in how they chronicle the aftermath of these events. While the film resolves little of the mystery, choosing to focus more on the effects the women’s disappearance has on the school and its denizens, the miniseries expands the story to include more from Lindsay’s novel, providing additional backstory and answering some of the questions the movie ignores.

The key difference comes down to the plot. Like a lot of ‘70s movies, the original Picnic at Hanging Rock has little. Given that the new version has to stretch the story out to six episodes, it naturally has more.

As a fan of the Weir film, I was instantly skeptical of the changes the miniseries makes. A classic of Australian cinema, the ‘75 version is resistant to classification, carrying a strong sense of the uncanny without ever fully dipping into the supernatural. Up until recently, I wouldn’t have even thought you could translate the strangeness of the film to TV. (After last year’s Twin Peaks revival, it feels like pretty much all artistic conventions and barriers between film and television have been torn down.)

One wonders what a director truly unconcerned with narrative conventions, like a David Lynch, would’ve done here. New Zealand’s own Jane Campion, no stranger to television herself, might’ve been another candidate to capture some of the cinematic weirdness of the film. Yet the new version of Picnic at Hanging Rock holds its own pleasures.

Director/producer Larysa Kondracki was in a unique position on the project, serving as showrunner without actually writing any of the episodes. What she ends up creating is a mashup of melodrama, horror, and psychological thriller, which is at times funny. Occasionally the dialogue is stiff and plays unintentionally as camp, but overall the stew of ingredients she throws together work.

There are also moments where Kondracki harkens back to the surreality of the film, and while they are a welcome addition, they’re not the miniseries’ greatest accomplishment. Details like the costume, set, and production design of Picnic at Hanging Rock, along with the eerie blend of rock and electronic music which create the score, bring weight and life to the source material. It’s also these separate, sometimes seemingly small touches, like the pink font of the title cards, which stick in the mind.

The mix of modern sensibilities with the period setting is no accident. The themes of Picnic at Hanging Rock are meant to resonate with audiences today, and although the miniseries’ main draw is not necessarily its exploration of female repression and how society forces women to conform, this does add a welcome layer. Picnic at Hanging Rock fits in with shows like The Handmaid’s Tale and Jessica Jones, which have not only put women front and center on camera but given them additional control behind the scenes as well.

Lily Sullivan, Samara Weaving, and Madeleine Madden all do fine work as the missing students. Anna McGahan, as their governess, along with newcomer Inez Currõ, French actor Lola Bessis, and Orange Is the New Black’s Yael Stone have memorable supporting roles as well.

The toughest task goes to Natalie Dormer, who plays the school’s founder and headmistress, Mrs. Appleyard. Dormer, who viewers will likely recognize as fan-favorite Margaery Tyrell on Game of Thrones, and from her work in Showtime’s The Tudors and the Hunger Games movies, has always been capable of holding the screen. But she falls prey to the classic television pitfall of being a lead character in a show where everyone around her is more interesting. Mrs. Appleyard is a complex protagonist, and the show builds on the character from the movie and the novel to give her a rich history, which becomes its own mystery. It’s never as fun to watch as the story of the missing girls, however.

Picnic at Hanging Rock’s biggest downfall ends up being the ecosystem of TV miniseries it’s competing against. While the back half of the episodes ramp up the tension with plenty of surprises that carry through to the finale, the first half may be too slow for casual streamers. But those who do stumble on Picnic at Hanging Rock will find it holds a few unexpected treats.