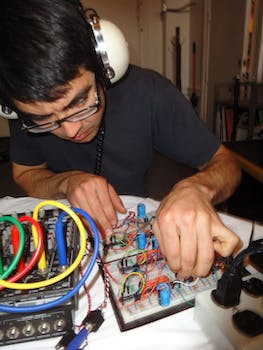 Stearns says he turned to Tumblr to "stay in shape and refine my sensibilities as an artist."

We let the glitches, manifested as pixels, bars, or technicolor waves, speak for themselves—but  we still had questions.

The Daily Dot spoke to Stearns to learn the details behind the digital defects.

Daily Dot: How many followers do you have?

DD: So far, you’ve manipulated cameras to create the glitches. Are all the glitches going to be intentional all year?

Right, cameras have played a large part in generating source material for further tweaking on the data level. A few of the posts so far started as images made by manipulating the guts of a camera, but then the raw file itself was altered. I’ll be working with a range of devices throughout the year and hopefully this sharpens my eye for ‘wild’ glitches found out in the real world. I feel confident that a few found glitches will make it into the stream, though they tend to be the most difficult to capture.

DD: Do you plan to sell prints?

The thought had occurred to me that maybe after the blog had been up and running for a while, I might produce some limited edition offerings (prints, textiles, etc.) or to whittle down the posts for a solo show later in the year, but that isn’t really the goal for now nor was it the intention when I started the blog. If there’s enough interest I might start making prints available.

DD: You’ve held plenty of exhibits in the past; why did you pick Tumblr to display your art this time?

The Year of the Glitch blog was sort of a whimsical idea that started without any intention but to explore different forms of glitches. I’ve been making art with modified computers, video game consoles, and self-built circuits for a few years now and thought this would be a good way to stay in shape and refine my sensibilities as an artist. I’m still new to Tumblr, but it seemed like the right platform for sharing images and other media simply. Producing work for a gallery show, although really rewarding, can be exhausting and expensive. I wanted a format that would allow me to do a quick daily post without taking away from my other projects.

DD: Tell us about your plans for the glitch project in the future.

I’ve been warming up with still images, but will begin delving into more video work in the coming weeks.  I have plans to work with sound as well. As far as giving this project a life outside of the Internet, I have been looking into different methods of printing.  For a solo exhibition in November at Rabbithole Projects, I produced several photographic prints and later sent some images to be woven into large throw blankets.  I’ve toyed with the idea of printing on canvas, but think that doing a tile mosaic would be really awesome.