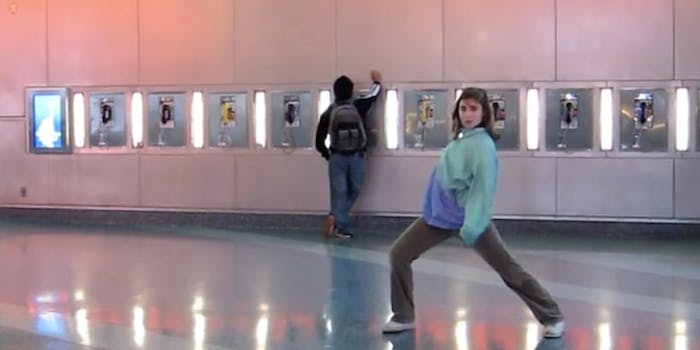 Is Pharrell’s ‘Happy’ video an homage to this dancer’s 2011 clip, or a ripoff?

One dancer gets even with “Pharrell Loves My Work.”

Pharrell’s song “Happy” is everywhere, and its ubiquitousness has made some people decidedly unhappy. However, dancer and actor Anne Marsen has a right to be a little upset about the interactive 24-hour “Happy” video. It looks a lot like hers.

The 2011 video Girl Walk//All Day, which was funded on Kickstarter and functioned as a companion piece to mashup producer Girl Talk’s album All Day, was critically applauded when it was released. The seven-minute video features Marsen dancing through different settings in New York City (Pharrell’s setting is Los Angeles), and while it’s not interactive like “Happy,” several of her choreographed moves show up in his video.

Marsen’s video was mentioned by a couple entertainment sites when “Happy” came out in November, but she says she found out about the video through friends’ messages on social media. Last week, Marsen released a side-by-side comparison of the two videos, titled “Pharrell Loves My Work.”

Is this an homage from someone in Pharrell’s camp, a straight ripoff, or just a coincidence?

The similarities are pretty damning, especially the last minute of the comparison video. Still, it’s difficult to claim choreographed dance moves, something constantly in flux and evolving, as intellectual property, especially on the Internet, where the concepts of appropriation and “borrowing” have themselves becomes copies of copies. In 2011, Beyoncé was accused of stealing some of the moves in her “Countdown” video from a Belgian choreographer.

The appropriation of music, well, that’s a whole other chapter. Pharrell was also accused of borrowing from Marvin Gaye’s “Got to Give It Up” to create “Blurred Lines.” Girl Talk borrows even more heavily for his work, but he often creates something completely different with it, and creates a different context.

These incidents set up an interesting quandary, though: Do you get mad, or do you try to get more exposure for your work via this possible idea theft?

Marsen, who has a supporting role on The Good Wife, told Spin that she and All Day’s director, Jacob Krupnick, aren’t necessarily upset at Pharrell, but were at least hoping for some recognition of their work—perhaps a tip of his giant hat—if he was influenced by the video.

We Are From L.A., the directors of “Happy,” claimed they’ve never seen Girl Walk//All Day. An email to Marsen for comment was not immediately returned.