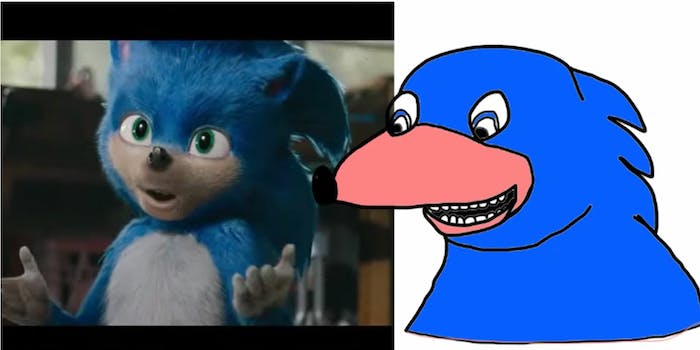 The auction is no longer available.

An eBay auction for a terrible drawing of Sonic the Hedgehog by Swedish YouTube star PewDiePie’s hit £10 million before it was pulled from the service.

Felix Kjellberg, who goes by PewDiePie on YouTube, where he has more than 95 million followers, announced Friday that he was going to try to draw Sonic the Hedgehog from memory.

The drawing was a series of cartoon characters he drew based off requests he got on his Twitter. He drew Pikachu and Super Mario, among others, but unsurprisingly, he eventually received a request to draw Sonic.

“Surely I can’t make it any worse than it was in that trailer,” he says in the video. “So let’s just freaking do this.”

PewDiePie, of course, was referring to the trailer of Sonic The Hedgehog that dropped last week, and fans were terrified by the titular character’s human teeth. (Sonic is now getting a redesign, thanks to the backlash.)

“I think what freaked everyone out was the fact that he had human teeth at least that’s what I was bothered by,” PewDiePie says while attempting to draw Sonic.

“Why does it look so creepy?” he says of his own drawing. “I’m trying. I’m scaring myself.”

On Saturday, PewDiePie tweeted out an eBay link where he was selling the “artwork.” Even though in his YouTube video he himself acknowledged that the drawing is, well, trash, he said in his tweet he was selling it because “money is tight.” (Anyone who remotely knows of his work knows that’s statistically unlikely, especially given that PewDiePie recently claimed he’s worth $20 million and earns $3,400 per hour.)

Fans clearly missed the joke (or chose to ignore it) and began bidding on the product on eBay. One person started a GoFundMe campaign to raise money for it. Though the description reads almost satirical, it wouldn’t be a complete surprise if there was a fan out there sincere enough to go such extreme lengths. The campaign was listed under “Accidents & Emergencies.”

Within the first 10 minutes on eBay, the bidding hit £10,000, and soon climbed to £1 million, before hitting £10 million, according to Dexerto.

The listing was not available on eBay on Sunday afternoon, but it’s not clear if PewDiePie himself moved it or if eBay pulled it. However, numerous fake listings of the “artwork” have since been posted.

EBay did not immediately respond to the Daily Dot’s request for comment.