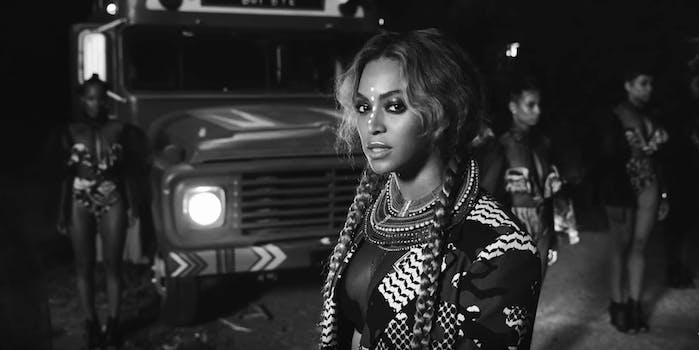 On Tuesday morning, history was made when the nominations for the annual 59th Grammy Awards were released, giving Beyoncé a total of nine in favor of her revolutionary album Lemonade. But people are losing their minds over one nomination, as her track “Don’t Hurt Yourself,” featuring Jack White, is up for best rock performance.

Die-hard fans of good ol’ rock n’ roll are questioning why the pop and R&B artist is even considered in a rock category, completely ignoring the fact that Detroit rocker Jack White is part of the nomination as well, and the hard-rocking song itself. Fans are saying “rock is dead” and accusing the Grammys of being “a joke,” but needless to say the reactions to boundaries being challenged are to be expected.

Grammy nominations always make me so livid. Beyonce for best rock performance? purpose as album of the year????

why is beyoncé nominated for best rock performance? her music isn't even close to rock. this is ridiculous and it's made me very upset.

But some people decided to cope with the fact that Yoncé is, in fact, the “Queen B.”

Not fully unsatisfied w/ the Grammy nominations bc they are what they are. But lol to Beyonce as rock performance. That woman can do it all.

Beyoncé made Grammy history with being the 1st artist to be nominated in the pop, rap, rock & R&B categories all in the same year!

The singer is nominated for record of the year, album of the year, song of the year, best music video, and other well-deserved nods. For best rock performance, Beyoncé will be up against Alabama Shakes’s “Joe (Live From the Artist Den),” David Bowie’s “Blackstar,” Disturbed’s “The Sound of Silence,” and Twenty One Pilots’s “Heathens.”

Beyoncé made history in becoming the most nominated female artist in Grammy history with 62 nominations and 20 wins. Now we will just see if she makes history again, winning best rock performance to show these haters she ain’t sorry.