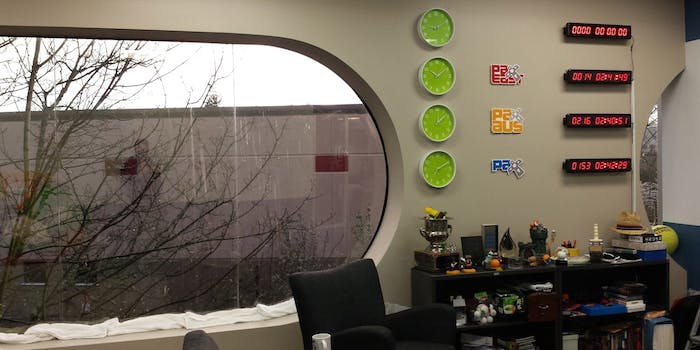 Robert Khoo's photo shows four clocks on an office wall: three counting down to the current PAX conventions, and one unlabeled.

A photo tweeted by Penny Arcade business manager Robert Khoo on Wednesday has many people speculating whether a fourth PAX convention will soon be announced.

The picture shows four clocks on an office wall, three of which are for each of the company’s current video game conventions that take place every year: Eastern Time for PAX East, Pacific Time for PAX Prime, and Australia’s Eastern Time for PAX Australia in Melbourne. A fourth clock can be seen above the other three with no current label. IGN pointed out that a photo shared by Khoo nine days ago displayed only three clocks on the same wall. Khoo has not tweeted since sharing the photo.

The mysterious nature of the tweet and Penny Arcade reposting it on their blog with the tease “What could it mean!!??” has many speculating that a new convention may be in the works and might even be announced at PAX East in Boston next week. The fourth clock appears to be in the U.S.’s Central time zone, which has caused gamers on the Penny Arcade forums to wonder if the convention may be a new “PAX Central” and brainstorming potential hosting cities from Austin to Chicago.

Austin was also a popular target of speculation for the third PAX convention site two years ago, before PAX Australia’s launch. The announcement for that convention was made at PAX Prime in 2012, setting a precedent for new cons to be introduced during current ones.

PAX East will begin in Boston on April 11.