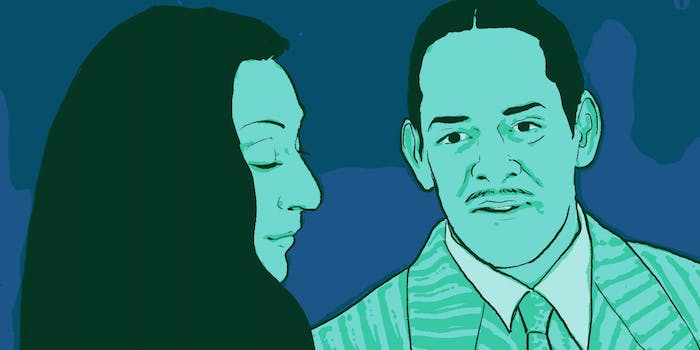 Stream 'em while you can.

The Peanuts Movie is No. 2 at the box office as I write this, having pulled in just over $83 million domestically since opening earlier this month. Clearly, there’s still a lot of love for Charlie Brown, Snoopy, and the rest, but Peanuts is just one tiny slice of the long history of comic strips being adapted for film, television, even video games. With Peanuts once again in the pop-culture conversation in a big way, we here at the Dot decided to look back at some of our favorite comic strip adaptations over the years, beginning with our favorite creepy/kooky clan…

Beatles or Stones? Flight or invisibility? The question of “Munsters or Addams Family?” may not precipitated quite as many bar arguments as those first two, but I think it says just as much about you as a person. I was always squarely on the Addams side of the equation. The Munsters may look more overtly horrific, but it’s only skin deep; under the neck bolts and widow’s peaks, they’re a bunch of pussycats. But the Addams clan? There was a real sense of darkness and genuine, well, ookiness lurking behind even their most mundane adventures in the 1964 TV series—the unsettling DNA of cartoonist Charles Addams’ morbid masterpiece comic strip surviving even the diluting effect of network television. That macabre brilliance is even better translated into the pair of films directed by Barry Sonnenfeld in the early ’90s.

The original Addams Family TV series ran for only two seasons on ABC from 1964-1966, but the longer seasons of the day meant that comprised a whopping 64 half-hour episodes. You can watch the entire run of The Addams Family on Hulu. As for the excellent movies—which still hold up brilliantly, by the way—both The Addams Family (1991) and Addams Family Values (1993) are currently available on Netflix Instant. John Astin or Raul Julia as Gomez? That’s a choice nobody should have to make, so we recommend you just binge watch all of it.

As a webseries spinoff, Melissa Hunter’s Adult Wednesday Addams was also immensely popular on YouTube, but the Addams Foundation requested its takedown for alleged copyright complaints.

Cartoonist Chic Young’s Blondie has been running in papers since Sept. 8, 1930, along the way inspiring both a long-running radio and film series. And we’re not kidding about the “long-running” part. The Blondie & Dagwood movies ran from 1938’s Blondie all the way through 1950’s Beware of Blondie, for a whopping total of 28 films. That beats out the Bond franchise, and they didn’t even have to recast. And thanks to the Internet’s nigh-endless catalog of fascinating shit you probably didn’t know existed in the first place, you can check out the full run of the Blondie films on YouTube. Even better: The films clock in a little over an hour apiece, so they’re perfect bite-sized entertainment if you’re in the mood for something silly, old-fashioned, and charming.

Both the Blondie comic strip and the films are about the titular plucky housewife, Blondie Bumstead, played by Penny Singleton and her bumbling but good-natured husband, Dagwood (Arthur Lake). Their relationship plays out a bit like a reverse of the I Love Lucy dynamic: She’s mostly the “straight man,” tasked with cleaning up Dagwood’s messes. In keeping with the film series’ comic strip roots, there’s also a surprising amount of continuity in the movies, even beyond Singleton and Lake’s presence, with the Bumstead children literally growing up in the roles over the course of a decade.

Since it’s the recent Charlie Brown movie that inspired this list, everybody’s favorite lovable loser has to hold a place of honor. Charles M. Schulz’s Peanuts comic strip ran in syndication for five decades, from Oct. 2, 1950, to Feb. 13, 2000. Repeats of the strip continue to grace damn near every U.S. newspaper to this day. Charlie Brown, Snoopy, and the gang have become an ever-present staple of American culture: Fashions may change, stocks may rise and fall, but one thing you can count on is that Charlie Brown is still going to keep falling for Lucy’s “pull the football away at the last minute” trick.

If anything, the Peanuts animated TV specials may actually be an even more powerful source of nostalgia for many than the comic strip. There have now been several generations for whom the holidays just wouldn’t be complete without A Charlie Brown Christmas or It’s the Great Pumpkin, Charlie Brown. Schulz’s creation also spawned four theatrical films before this year’s CGI outing, and the first two are currently available on Hulu: 1969’s A Boy Named Charlie Brown and 1972’s Snoopy, Come Home. That’s only a small slice of Peanuts’ legacy on the big and small screens, but if you want to see the dozens of Peanuts TV specials that have aired since the ’60s, you’ll have to scour YouTube, your local DVD store, or Amazon.

The iconic square-jawed lawman with the yellow suit and the radio watch, Dick Tracy was created by Chester Gould and debuted in the Detroit Mirror on Oct. 4, 1931. Gould himself spent over 40 years spinning two-fisted tales of Tracy’s never-ending battle against his colorful rogue’s gallery of criminals, most of them distinguished by exaggerated physical characteristics that made them look more at home in the Mos Eisley Cantina than an FBI lineup—baddies with names like Flattop, Pruneface, and The Blank.

Dick Tracy has been adapted countless times for radio, film, and television, but unquestionably the most high-profile incarnation was the 1990 movie directed by and starring Warren Beatty in the lead role. The film spent a decade in development before Beatty took the reins, passing through the hands of other potential directors such as Steven Spielberg, Walter Hill, and John Landis. Very much riding the coattails of the Tim Burton’s successful Batman from the year before, Beatty’s Dick Tracy sported a Danny Elfman score and brought Gould’s colorful world to life with a cast that included Al Pacino, Dustin Hoffman, William Forsythe, and Madonna as femme fatale Breathless Mahoney. Unfortunately, decades of lawsuits that followed have kept any sequel plans sleeping with the fishes, but now you can at least enjoy Dick Tracy on Hulu… so long as you’re springing for the Hulu with Showtime package.

Launched in 1978 by cartoonist Jim Davis, Garfield has become just as omnipresent a fixture in the funny pages as Schulz’s Peanuts, and has enjoyed a similarly successful multimedia life. Davis’ droll, lazy, lasagna-loving feline has spent 37 years complaining about Mondays, harassing his canine companion Odie, and belittling the love life and intelligence of his owner Jon Arbuckle. Along the way, the strip has sometimes been an easy punchline for critics of the form, not to mention the inspiration for brilliant deconstructive meta-projects such as “Garfield Minus Garfield.” Still, Garfield remains oddly comforting even at its most predictable, like an old comfy sweater covered in orange cat fur.

Garfield’s most high-profile expeditions beyond the newspaper page in recent years came in a pair of CGI/live-action films starring Breckin Meyer, Jennifer Love Hewitt, and Bill Murray as the voice of Garfield. But there were plenty of other riffs on Davis’ sarcastic kitty before that, including a dozen primetime TV specials throughout the ’80s and early ’90s. My favorite version of Garfield, however, remains the animated series Garfield and Friends, which ran from 1988 to 1994. A staple of Saturday-morning TV in that era, Garfield and Friends followed the ongoing adventures of Garfield, John, Odie, and the rest, interspersed with toons based on another Jim Davis strip, U.S. Acres. More importantly, Garfield and Friends featured the one true voice of Garfield, the late and legendary voice actor Lorenzo Music. I’ve recently been introducing my own kids to Garfield and Friends, and it still holds up really well as good-natured family entertainment. Thankfully, the entire run of seven seasons is available on Netflix Instant.

Perhaps the single most powerful weapon in the parental arsenal when it comes to getting kids to actually eat their spinach, Popeye the Sailor Man has been gracing the funny pages longer than anyone else on this list, first appearing in an installment of Thimble Theater on Jan. 17, 1929. Created by E.C. Segar, the squinty seaman soon became the star of a series of theatrical cartoon shorts for the legendary Fleischer Studios, and his multimedia voyages have continued for what’s fast approaching 90 freaking years.

With his grotesque and exaggerated proportions, Popeye isn’t a cartoon character who lends himself well to live action, but that didn’t stop director Robert Altman from giving it the old college try, and he started well by casting a human cartoon in the lead role. The late Robin Williams was perhaps one of the only humans capable of playing a live-action Popeye, and damned if he didn’t give it his all, even while saddled with ludicrous-looking prosthetic forearms. Even more perfectly cast was Shelley Duvall in the role of the waiflike Olive Oyl. And just because the idea of a live-action Popeye movie wasn’t weird enough on its own, they decided to make it a musical. Robert Altman’s Popeye can currently be viewed on Hulu with Showtime, and it’s just as weird as you might imagine.