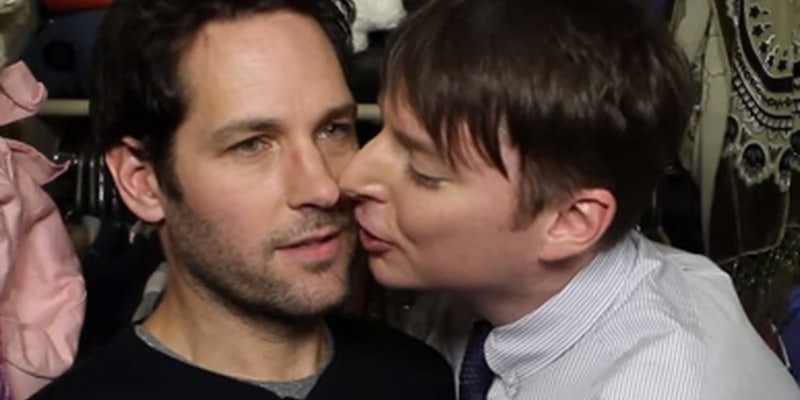 The actor was charming as ever on Above Average Network's closet-based interview show.

If anyone is looking for Paul Rudd, he’s in the closet.

Joining host Mike O’Brien, everyone’s favorite actor has a moment in a new episode of “7 Minutes of Heaven.” The Above Average Network released the episode Tuesday.

The guys talk about a lot of important issues, including the emigration of Polish Jews to America, labeling Rudd with appropriate adjectives (“safe driver”), and Rudd’s favorite butt-shaving method.

“I like to use an old-fashioned straight razor,” confessed Rudd, regarding how he manscapes his derriere. “I don’t even use water. It’s the way my papa taught me.”

There’s also a wonderfully stupid edition of ‘Closet Theater’ in the episode. O’Brien “sleeps” in his haunted closet while Rudd plays some paranormal tricks on him. Even when Rudd is trying to be spooky, he can’t stop being charming.

Of course, no episode of “7 Minutes of Heaven” could end without a smooch. O’Brien’s peck, as pointed out by Rudd, was too focused on the bottom lip, and not the top. Watch how he remedied that below.