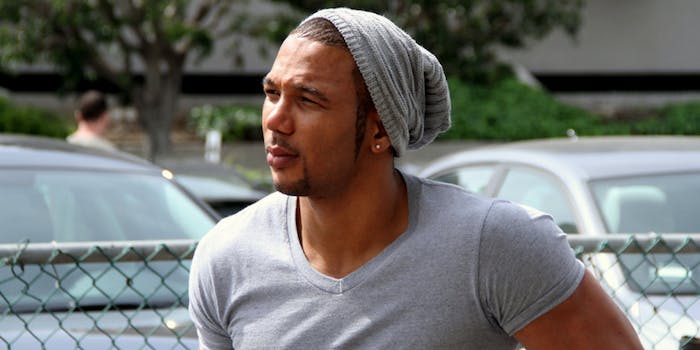 Their professional relationship changed when he sent a 20-minute voicemail.

A 25-year-old graphic designer based in Oslo, Norway, claims that Patrice Wilson, the man famous for Rebecca Black’s viral hit “Friday,” contacted her for professional work, but that their conversation turned less professional when Wilson suggested a romantic relationship.

The producer famous for working with young women and girls sent model and actor Dora Marbl harassing messages after she rebuffed his advances and allegedly dangled the carrot of a role in a new series if she’d move to the U.S. and work for him—while being paid under the table. He also made vague threats to her in messages reviewed by the Daily Dot.

Marbl says Wilson contacted her in November via Instagram, first to ask if she did graphic design work, as she currently lists “graphic designer” in her bio. Their Instagram and WhatsApp exchanges—screenshots of which Marbl has provided to the Daily Dot—ran from late November to early January. She says at first Wilson was friendly and helpful, affirming her talent and offering advice on the entertainment industry and how to avoid unsavory characters; sending her YouTube clips on acting and showing her how to format a resume; offering to find her a domain name; and reassuring her that her mother shouldn’t be apprehensive about his intentions.

Still, Marbl told the Daily Dot she was “afraid it was too good to be true, which was exactly what it turned out to be.”

In introductory messages on Instagram, Wilson says he’s a “filmmaker and music creator.” He mentions working with Netflix and a recent “music project with the BBC in Sweden.” (The Daily Dot reached out to Netflix and the BBC but they did not respond to a request for comment on whether Wilson had projects in the works with them.) Marbl did not recall the name of the series he was casting, but he did tell her it was being shopped to Netflix and Amazon. (The Daily Dot reached out to Amazon but a representative claimed no Wilson-related project had been submitted there.) She was eventually sent a script and recorded an audition.

“He said I was more talented than he thought,” she tells the Daily Dot by phone. Wilson told her she would get the part, but she’d have to move to the U.S., where the show was being filmed. She could stay in Colorado, where he currently lives, or Los Angeles.

Marbl says she never signed any sort of contract, and they never met up in person—though a meeting was planned for Oslo in late January. Wilson allegedly shared more personal details of his life with her and asked about her personal life as well, which she went along with because she thought he was trying to get to know a potential client. But Wilson also switched between being more of a friendly entertainment-world guide and presenting himself more formally as a future manager.

While Marbl says she was keeping things professional, the tone apparently changed in early January with a 20-minute WhatsApp memo from Wilson, in which he tells Marbl to keep following her path to acting, but that he‘s interested in being romantically involved. He claims that a relationship wasn’t his intention at the beginning of their conversation and that before she objects, she has to meet him in person. “I’m still going to change your mind,” he says in the memo, obtained by the Daily Dot. “You’re still going to get to like Patrice. If you hate me now, you’re going to like me.”

In WhatsApp messages, Marbl pushes back against this proposal, saying she saw him as a “professional” and a “guide,” not “a potential boyfriend.” Marbl says her mother and brother both expressed concerns over Wilson’s intentions, and when she told Wilson this, he got defensive. “Because of course they don’t trust some random guy that appears out of nowhere, and promises me to help me pursue my dreams without being able to explain why,” she tells the Daily Dot.

In the 20-minute voice memo, Wilson also suggests that if she came to the States he could possibly pay her under the table while she worked for his company until she was legally able to work in the States.

“And I said that sounds like prostitution,” Marbl recalls to the Daily Dot.

Wilson also apparently bought a domain in her name, which Marbl says she didn’t ask for. After she rejected his proposal, he allegedly would not share the login details with her. The website doramarbl.com currently goes to a dead GoDaddy page, but a search for the domain shows it was created on Jan. 1. In one voice memo obtained by the Daily Dot, Wilson references the domain as a “New Year’s present.”

Marbl says she initially reached out to the Daily Dot about her exchanges with Wilson because she saw that he had worked with younger female performers—most notably Rebecca Black on 2011’s “Friday” and later with Nicole Westbrook (“It’s Thanksgiving”) and Alison Gold (“Chinese Food,” “Shush Up”)—and she wasn’t sure if other aspiring performers had been put in the same situation.

When I interviewed Wilson in January 2016, he mentioned “the new me” and that he was done with all the viral stuff and the “haters.” This was shortly after he released the video for “Beautiful,” in which he delivers two babies while shirtless and gets splattered with rainbow-paint afterbirth.

In December 2017, he made his last public appearance, a couple weeks after his mysterious livestream was covered by popular YouTube channel h3h3. Hosts Ethan and Hila Klein have critiqued Wilson’s videos before, but Wilson’s livestream appeared to be directed at them. The h3h3 hive got to work and found a trailer for a horror series called Vantage Points, which Wilson is involved with. But the stream was apparently more personal than that. In a video labeled “Patrice Wilson Final Message-end of the livestream finale,” Wilson appears on camera to reveal how hurt he was by h3h3’s past videos and claims that he’s had suicidal thoughts. But he’s put the “old me” in the past. Once again he mentions “the new me.”

Wilson’s LinkedIn lists him as executive producer and CEO of Sonic Media Networks since March 2017. The LinkedIn also lists Vantage Points, and a Vimeo page for Sonic Media Networks includes half a dozen clips from the series. A website for the company is currently down, and it appears any production on the series has been put on hold.

Reached for comment, Wilson recounted some of the “soul searching” he’s done over the last two years, but said he’s returning with “something different” and that “all will be revealed soon.” Asked in a follow-up email about Marbl’s allegations, purchasing the domain name, and what specific projects he was casting for, Wilson replied: “There was no management/client relationship. We were on friendly terms and spoke at length on various subjects, including the music and movie industry.”

In some of the last exchanges Marbl provided to the Daily Dot, Wilson advises her to “never burn bridges” and to “be careful with blackmail or threats.”

Marbl says this experience hasn’t deterred her from pursuing and studying acting, but she hopes it might help other aspiring actors: “I think it’s important to let the world know how guys like Patrice are abusing their power and position.”