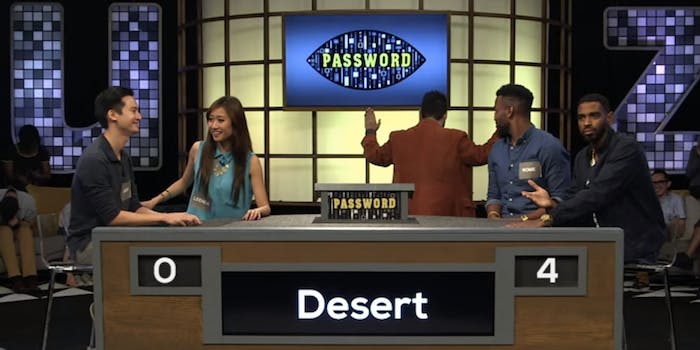 This amazing ‘Password’ blooper will have your jaw on the floor

Buzzr brought classic game shows to YouTube, but no one ever expected this.

But the clue reader on both teams read it as “dessert.”

When they realized their mistake, things only got worse, with guesses ranging from “cake” to a female body part. This is one of the most epic game show bloopers you’ll ever see, and the whole thing took place on YouTube.

YouTube’s version of Password launched this year on Buzzr, a new channel dedicated to combining a stable of memorable game shows with the world of digital celebrities. FremantleMedia’s digital offshoot Tiny Riot! developed the channel as a way to connect the 150 classic game show formats they own with a new generation of digital consumer. They’ve already racked up hundreds of thousands of views on various clips with guests like Jc Caylen and the Merrell Twins. There’s even an app in the works, and eventually television integration is coming as well.

For now, though, it’s all about YouTube, and overall things on the first seasons of Password, Family Feud, and Body Language have been wacky—but nothing at the level of the desert/dessert meltdown. Even the crew couldn’t keep it together as the contestants dug themselves deeper and deeper into a blooper hole.

“It was insane,” explained host Steve Zaragoza. “As soon as the first team messed it up, it was over. It was like the domino effect. There was no way we were going to come back from that ever. How could they mess it up so badly?”

Zaragoza is a staple of the YouTube landscape as a Sourcefed host and a star in webseries like Frankenstein, MD. As a game show host, he’s got the chops, effortlessly guiding the players through banter and keeping the excitement levels high. For Zaragoza, it’s the stuff of bucket lists.

“I grew up watching game shows, so now that I am the host of one, it’s definitely ‘dream come true’ stuff going on here,” he said. “I get to be as wacky as I want to be, and somehow I still keep getting jobs.”

Before you judge the above teams too harshly for their slip-up, sitting under the lights and dazzled by Zaragoza’s charm, remember it’s harder to play the game than you think. The Buzzr team let a few journalists take a turn at the show, and as a guesser during one round, my brain was definitely not as sharp as it is with the power of Google behind it.

Um my clue card for password was super kinky you guys.

My score? Three of five. For the record, I would like to note that I got very close on one, guessing “orgasm” for “climax.”

Buzzr posts new episodes of its series weekly and has already begun filming a second season to the show at the YouTube Space LA.