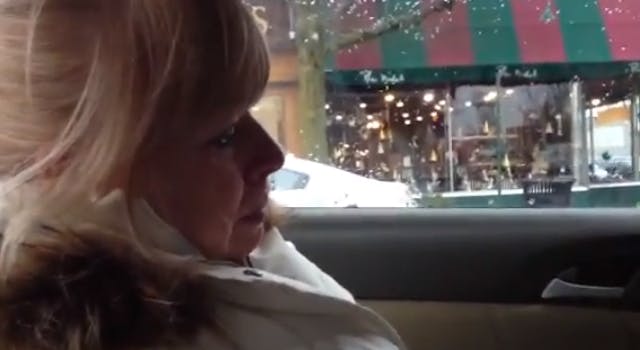 Apparently, it's a pretty sad movie.

The waterworks are flowing freely for many after watching the film adaptation of Les Misérables, but one family’s endearing reaction has gone viral after their two children posted the video to YouTube.

“The aftermath of our family trip to the Les Mis movie starring Hugh Jackman and Anne Hathaway,” Ryan and Kevin Ferguson wrote in the video description. “Enjoy. We love our parents and we hope you will too.”

The Fergusons of Long Island, N.Y., saw Les Misérables shortly after its release, and while the entire family was affected by the story, the parents were still crying after the closing credits. Once they got into the car, Ryan Ferguson, who sat in the backseat with his mom, started filming as he asked his parents about the film.

She further explained that it was the end of the film that affected her, and even then she had trouble putting her thoughts into words.

At one point Ryan and Kevin started laughing, but they were quickly scolded.

“How could you laugh?” their mother asked.

Ryan and Kevin’s father, George, was also clearly upset as well, and while he might not have thought the film was better, he was still touched by the actors’ performances.

The video has over 100,000 views since the Fergusons posted it Dec. 28, including a few by past and current cast members of Les Misérables. Russell Crowe, who plays Javert in the current film adaptation, tweeted another version of the video to over 696,000 followers, and Rebecca Caine, who played Cosette in the original London production, responded to Ryan personally on Twitter.

“@Ry_Ferg All the ex cast are enjoying it on my Facebook too. Glad to have been part of making something that is so meaningful to people,” she tweeted.