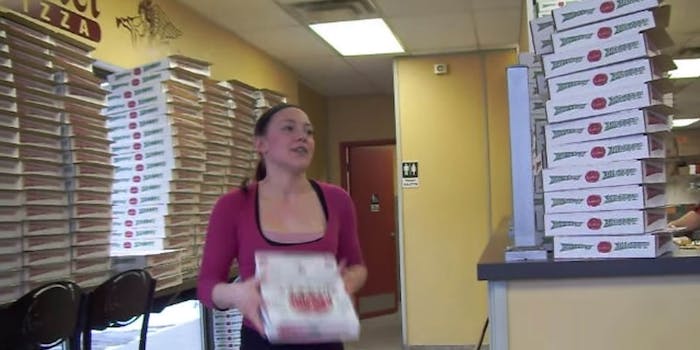 How a viral pizza box folding video ended up in ‘Parasite’

Breanna Gray has received lots of support since the film's best picture win.

Early in Parasite, Bong Joon-ho’s sharp and insightful satire, the Kim family watches a short video on how to quickly fold pizza boxes on one of their smartphones so that they can quickly work their way through the pizza boxes they have to fold even as smoke from fumigation comes through the apartment’s window. And in the wake of Parasite’s historic best picture win, the star of that viral video is opening up about how her video ended up in Parasite in the first place.

Breanna Gray’s pizza-folding video is rather self-explanatory just by the video’s title. Over the course of 50 seconds, Gray folds box after box. It initially went viral when she first posted it in 2015, but if the comments are any indication, many recent views are from people who saw the short clip of her video went and looked it up after seeing the movie.

As Gray explains in a recent YouTube video, the original video is a culmination of a skill she perfected working at a pizza restaurant for several years. She already experienced going viral after the first video went online in 2015; she was contacted by Ellen at one point for something that never came to fruition and even won a pizza box folding competition in Canada. Currently, the 50-second video has more than 1.5 million views.

But eventually, the producers of Parasite contacted Gray about using the video in the film, something that Gray agreed to even though she didn’t recognize Bong’s name at the time.

“They gave me a very, very brief description of how it was going to be used,” Gray explained. “Just that this ne’er-do-well family is trying to make pizza boxes really fast like the great western master, blah blah blah. And I was like, well that’s pretty cool, yeah, sounds good! At the time, I didn’t know who the director was, what other films he had done, and how popular he really was. So, obviously, it was a much bigger movie than I was expecting.”

Gray’s video got another wave of views during the Oscars, and after she commented on a Reddit post about it (and why she couldn’t monetize the video), redditors started to subscribe to her YouTube channel to give her the minimum number of subscribers so that she can start to make money off the YouTube video.

“I could say that my video was in an Oscar-winning movie, but not a big deal,” Gray said. “It’s pretty cool.”

And what does Gray think of Parasite? We’ll have to wait for her reaction because, as she told one redditor, she hasn’t seen it yet.