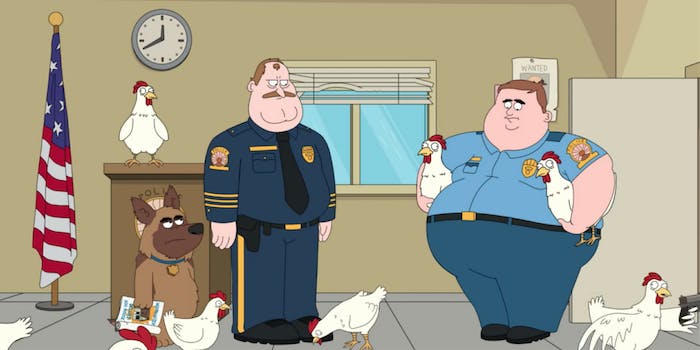 The series adds to Netflix's growing wave of animated raunch-coms.

Paradise PD, the new Netflix animated series from Waco O’Guin and Roger Black, isn’t a continuation of their Comedy Central series Brickleberry, but it could be part of its extended universe.

The show, which debuts Aug. 31, focuses on the police department of the fictional town of Paradise, led by lunkheaded Chief Randall Crawford (Tom Kenny). The police department is a collection of misguided and outdated misfits, who haven’t been circulated out due to a lack of money. To make things worse, Chief Crawford’s son, Kevin (David Herman), wants to be a cop like him. There’s also a literal drug dog (comedian Kyle Kinane in the role he was made for) and a meth scourge on the town.

At Rooster Teeth’s RTX on Friday, we got a look at the first episode of the series, which adds to Netflix’s wave of animated raunch-coms for adults. Creators O’Guin and Black were joined by Kenny and Dana Snyder (who voices police officer Dusty Marlow) to discuss the origins and production of the series.

As with Brickleberry, the show is about public servants and O’Guin said the inspiration came from his extended family: He has brothers who are cops, and his father-in-law is a park ranger. There is a current in the first episode about anti-cop sentiment in the town, but Black and O’Guin also don’t make Paradise’s police department shining examples of the human experience. There are a lot of butthole jokes.

Kenny noted the parallels between the two shows: Paradise PD is “Brickleberry on Earth B,” he said, later adding that it’s like “Brooklyn Nine-Nine meets Breaking Bad.” Snyder, who also voiced Master Shake in Aqua Teen Hunger Force, said his character is “a diabetic heart with arms and legs.” There was also a read-through of the episode 2 script, which featured an extended bit about bleaching a cat’s butthole.

Netflix has started to shape a genre around original adult cartoons, with BoJack Horseman and Big Mouth being two recent entries, as well as the upcoming Tuca & Bertie. Paradise PD has its share of gross-out moments and off-color jokes, but it also has the benefit of a built-in following and the presence of voiceover titans like Snyder and Kenny. (More than once, someone in the audience could be heard professing how influential SpongeBob Squarepants was on their childhood.)

O’Guin said the series came to them pretty quickly and they didn’t have to deal with any unprofessionalism: “We like to hire people we don’t have to direct,” he said.