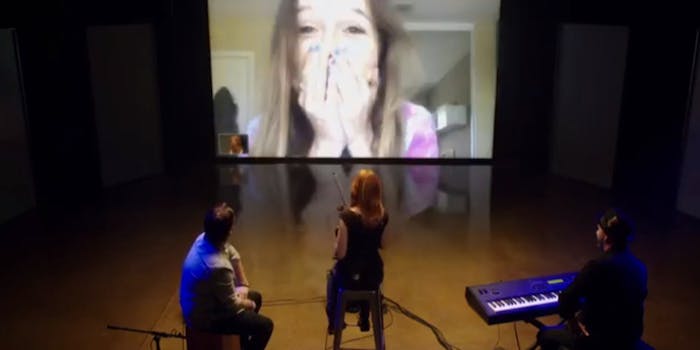 Pandora wants you to get familiar with ‘Thumb Moments’

Put a thumb on it.

As the music subscription service market gets more and more crowded, companies are looking for ways to personalize the experience. Today, Internet radio service Pandora debuted a new project that breaks down the fourth wall and brings the experience to listeners.

On Pandora, hitting a thumbs-up trains the program to play related songs and genres; a thumbs-down lets listeners move on to another genre or song. Earlier this month, Pandora tested out a new campaign related to the thumbs-up feature. Listeners who “liked” popular YouTube artist Lindsey Stirling were treated to a message from her, asking them to chat via FaceTime. If they chose to do so, they were offered an intimate performance from the violinist, via a studio in Los Angeles. Her fans were elated.

In a blog posted yesterday, chief marketing officer Simon Fleming-Wood explained a bit more about these proposed “Thumb Moments,” and how interactive they might be. Eight listeners “were connected via FaceTime for a personal chat and an intimate, private concert. Taking it even further, they were able to control the lights with hand motions during her performance.”

“We see this project as an extension of the highly personalized experience that our listeners already know and love,” Fleming-Wood told the Daily Dot. “Every time a listener thumbs a song, they are providing feedback that makes their Pandora stations more personalized. We wanted to create a thought-provoking experience that illustrates the power of Pandora’s personalization to create magic moments for our listeners by connecting them to the right music at the right time.”

Stirling was the beta test for this new online campaign, which comes courtesy of San Francisco advertising agency TwoFifteenMcCann and follows up other targeted Pandora efforts. According to the New York Times, the “advertising expenditure for the campaign, which will appear on websites including BuzzFeed, Facebook, and Twitter, is estimated at $5 million.” Fleming-Wood says they zeroed in on the “Thumb Moment” and grew the campaign from there.

“When we were thinking of how to best exemplify the Pandora brand in this campaign, we looked to the thumb and how we could build on that experience,” he added. “We feel we accomplished the best of both worlds—for artists and listeners—with Thumb Moments. The listener gets a once-in-a-lifetime experience in direct response to an action they just took and the artist gets to connect, in-person, with their fans.”

Pandora wouldn’t comment on who might be next in the lineup, but Fleming-Wood says the element of surprise is key here, and that the goal is to “reflect the diverse range of artists that listeners know and love on Pandora.” By breaking down that fourth wall, they’re also tapping into the emotional experience of the fan-performer relationship, which is increasingly important online.