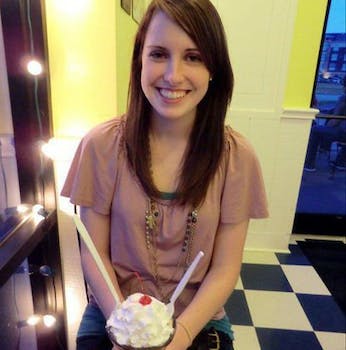 A new image macro justifies the psychotic behavior of the world's clingiest meme.

Laina became an overnight Internet sensation when her creepy YouTube cover of Justin Bieber’s “Girlfriend” went viral in early June. The video, which features a wide-eyed Laina staring intently into the camera as she sings, has since collected more than 11 million views and inspired an image macro in her likeness: Overly Attached Girlfriend.

Despite the meme’s portrayal of her as an obsessive psycho, Laina has taken the fame in stride, often posing with fans for photos when out in public. But what the world has come to realize is that she is just a normal gal who is misunderstood.

That was the subject of a new chapter of the Overly Attached Girlfriend meme featuring a photo of Laina pleasantly eating a sundae and smiling normally. Here are some of the best image macros so far from Overly Misunderstood Girlfriend:

All images from quickmeme