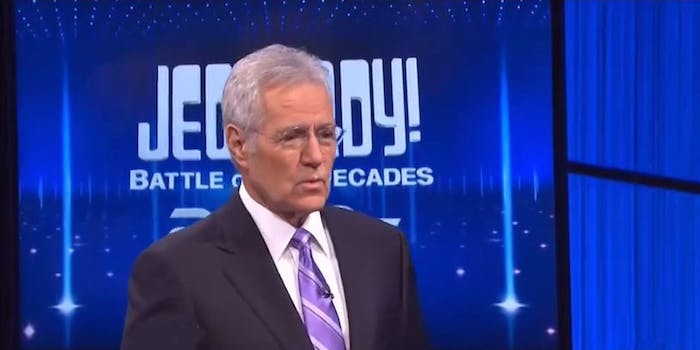 ‘Jeopardy!’ contestant talks down to Alex Trebek, and the Internet will have none of it

No one gets to talk to Trebek the Treasure that way! No one!

One silly Jeopardy! contestant out there realizes that you may only insult host Alex Trebek’s mother, not his fancy attire!

Contestant Tom Kavanaugh, a previous 8-time winner, was appearing on the game show as part of the Battle of the Decades series. In his interview with Trebek, he noted that his potential prize winnings would fund a documentary focused on exposing sweatshop labor both in the United States and around the world.

Unfortunately, his goodwill was marred by a cheap shot fired at Trebek (begins at 1:27).

Kavanaugh’s little quip, which was uploaded to YouTube, has been seen over 244,000 times. YouTube users were quick to denounce him, noting that he could have “used his 30 seconds to talk about his project WITHOUT being such a dick about it.” Another user referred to him as “your typical smug hipster who thinks they’re the first one to expose some terrible injustice.”

Kavanaugh had better hope that Trebek doesn’t “accidentally” misread his handwriting during Final Jeopardy! and cost him the game.