Looks like one of the most iconic diabolical villains in telenovela history has been sent to Litchfield for her crimes—and she’s not here to make friends.

Orange Is the New Black has been given the telenovela treatment with Naranja Es el Nuevo Negro, a fun little video posted to the show’s Facebook page that features actress Itatí Cantoral reprising her role as Soraya Montenegro. 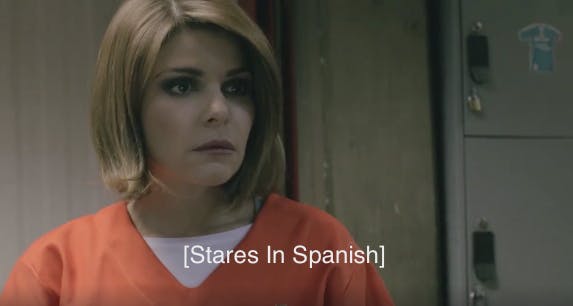 Soraya has had a bit of a comeback since her days on María la del Barrio as the star of the popular “Cries In Spanish” meme. Those familiar with the show know that she’s a lady you do not want to mess with. In her show, she killed her husband to steal his fortune and got into violent fights with practically everyone, even her wheelchair-bound stepdaughter.

With the help of some creative editing, Soraya explodes in anger after getting hit with pie by Crazy Eyes and isn’t letting the fact that Brook is sitting on her bunk just fly. Oh, and even Vee is no match for the unparalleled level of madness of Soraya.

News broke earlier this month about Cantoral’s return for an OITNB promotional scene. She told Mexican news site Excelsior, “It’s incredible! Because they are going to put the most important Mexican villain, Soraya, in jail.”

The telenovela madwoman’s revival makes a lot of sense since much of the plot in season 4 plot centers around the prison’s group of Spanish-speaking women.

And while it looks like Soraya’s going to be in the SHU for a while, hopefully she’ll be back with the other women soon. The drama’s just too good.