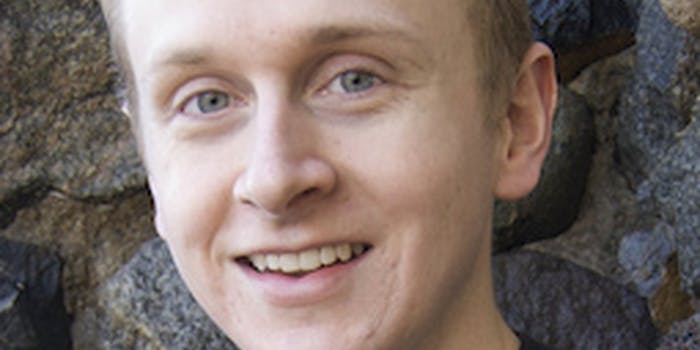 “On the Road” gets the brospeak treatment

Jack Kerouac’s On the Road is a timeless novel that defined modern masculinity. In the 21st century, as men have devolved into bros, all it really needed was an update with exclamation points, slang, and taquitos.

One daring soul willing to take Kerouac’s chef d’oeuvre across the chasm into brodernity is Tumblr user Mike Lacher, who turned Kerouac’s legendary novel into a full-length brospeak novel.

In April Lacher will publish On the Bro’d. Over the last 15 months, Lacher has written at least two pages a day on Tumblr, turning On the Road into a brotastic piece of writing that even The Situation might relate to.

“I think my process was probably a little less romantic than Kerouac furiously spilling his feelings and memories onto a scroll,” Lacher told the Daily Dot. “The parody is for the most part accurate to the sentence, so I’d go sentence by sentence, taking what Kerouac wrote and rephrasing it, sometimes just with different words, sometimes with more updated content to make sense in the context of bros (Old Bull Lee has flatscreen televisions instead of children; people just check their iPhones all the time instead of smoking).”

Lacher is no stranger to Internet humor: His hilarious piece for McSweeney’s, “I’m Comic Sans, Asshole,” is an Internet legend, collecting 65,000 likes on Facebook and more than 8,600 retweets. But nothing prepared Lacher for the task of parodying 320 pages worth of prose.

“Writing a parody is at the same time much much easier and much much harder than writing normally,” Lacher said. On one hand, the structure is there, you don’t need to worry about where it’s going or if you need to overhaul the plot of the first fifty pages. On the other, it can become frustratingly slow, writing at the level of words and sentences instead of paragraphs and pages, and it can be a little mechanical.”

Lacher spoke to the Daily Dot to share his inspiration for the book, what he thinks of On the Road,” what Kerouac would have thought of his parody, and how Tumblr kept him sane.

Daily Dot: What’s the story behind On the Bro’d? How did you get the idea to parody one of the most important piece of Beat literature?

Mike Lacher: I first thought of it just as a stupid pun. But as I started to write it, I realized that bro language actually plays off the original work pretty easily. To some degree, On The Road is a chronicle of an epic bro journey, describing some dudes going on an awesome road trip and getting hammered and laid as much as possible. Of course there are factors like cultural context and Kerouac’s talent which elevate it above a Tucker Max blog entry, but at some level On The Road is already a book about bros.

DD: What’s your background with literature and On the Road? Is beat literature something you read on your free time?

Lacher: I’m not particularly well-versed in beat lit. I first read On The Road in high school because I’d heard it was great, but it didn’t have much of an effect on me. I just didn’t have that much of a connection with the book. I think I was generally repelled by the bro-ish elements of the book, it just seemed like a book about jerks who get drunk and are generally mean to women. Reading it again year later, I still don’t have the emotional connection with the book that some people do, but I understand it’s appeal and it’s position as a “great book.”

DD: How does Tumblr fit into On the Bro’d? You’ve posted more than 130 excerpts from the book on the microblogging platform. What’s it been like seeing the reactions from folks on Tumblr?

Lacher: I originally tried to write On The Bro’d as a short piece, just trying to smash together all the funniest stuff from the first couple chapters. But it didn’t turn out all that funny or interesting, because it didn’t feel very Kerouac-y, in that it was short and compact. I shelved it for a while, then realized that it would sound more like the original and be funnier if it was a sentence-for-sentence translation, so it could really ramble. So I just started posting it online, and people kept reading it, and then the opportunity to make it into a book came along.

Tumblr’s a fantastic place to post content. I started posting projects there a couple years ago, and it’s an amazing way to spread your work around. It’s really cool to see people react to it and share it with friends. I love how the reactions range from “you ruined this I hate you” to “this is amazing” to “Kerouac was already for bros.”

DD: What do you Kerouac would say about your book?

Lacher: I’m not sure what he would make of it. I imagine he’d see the humor in it, but also think it’s sort of dumb, which is probably right way to look at it.

DD: What did you learn about yourself after writing your first book? Do you have any plans to write again?

Lacher: I don’t think I emerged from it a different person, but it was certainly a good experience in terms of cranking out that much content. I’d never attempted a creative project that involved so much sustained, methodical effort. While on the one hand, writing a parody can seem sort of mechanical, I think it has helped me attack projects in a better way.

I definitely have plans to write again. I still contribute occasional short things to McSweeney’s and am working on some longer-form stuff. I also keep pretty busy programming Internet jokes. Many of them are on mikelacher.com.

DD: One of the most famous lines in On the Road involves Kerouac describing a bunch of people dancing in the street like “dingledodies” who “burn, burn, burn like fabulous yellow roman candles exploding like spiders across the stars.” How’d you parody this legendary prose?

The only bros for me are the mad awesome ones, the ones who are mad to chug, mad to party, mad to bone, mad to get hammered, desirous of all the chicks at Buffalo Wild Wings, the ones who never turn down a Natty Light, but chug, chug, chug like f*cking awesome players exploding like spiders across an Ed Hardy shirt and in the middle you see the silver skull pop and everybody goes, “Awww, sh*t!”