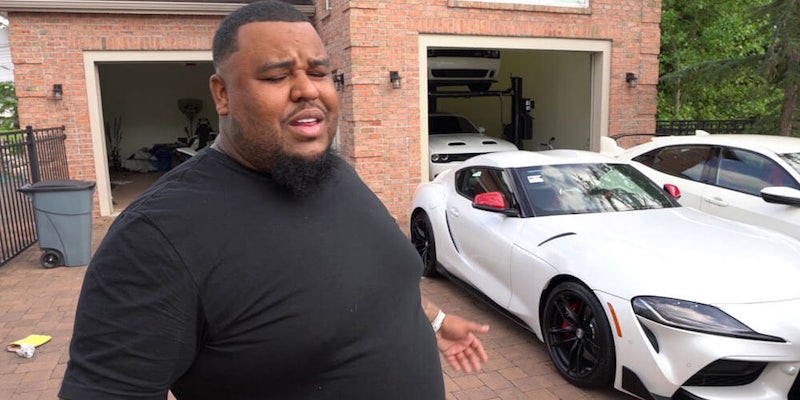 Omi in a Hellcat says he's being investigated for tax evasion and money laundering.

A popular YouTuber says the FBI “took everything” during a recent raid on his Philadelphia home.

Bill Omar Carrasquillo–referred to online as “Omi in a Hellcat”–is known for both his lavish vlog-style videos, as well as “Gears Reloaded,” an IPTV app that allows users to watch a wide range of premium cable content.

In a lengthy video published to his YouTube channel Wednesday, Carrasquillo, who has nearly 500,000 subscribers, says federal agents seized everything, from several luxury vehicles to “every SD card, every camera,” and “every television in my house.”

“This ain’t clickbait,” Carrasquillo says in the video. “This ain’t fake, this is not fake. This is 100% real.”

Carrasquillo states the raid may have stemmed from numerous financial issues and urged his followers to support him by buying his merchandise.

Specifically, the YouTuber claims he is being investigated, not only for tax evasion and potential money laundering but also for his Gears Reloaded service. Carrasquillo states the service exploits a legal “grey area” in regard to copyright infringement by giving users access to channels like HBO, Showtime, Cinemax, and Stars.

Carrasquillo, who appeared to place blame on an accountant tasked with doing his taxes, has previously stated his wealth was earned through real estate, construction, and several side businesses.

In a statement to Heavy, the U.S. Attorney’s Office for the Eastern District of Pennsylvania declined to “confirm nor deny the existence of an investigation.” The FBI similarly declined to comment on the alleged investigation.

Carrasquillo speculates that he will likely end up in jail for several years.

“This is a life lesson,” Carrasquillo says. “Now to see who are my real friends in a time of crisis, a time of need.”