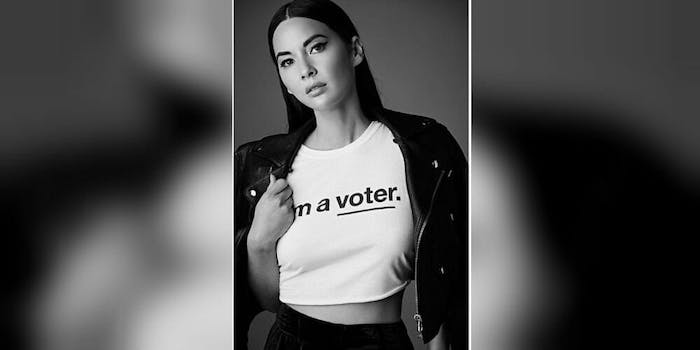 In a hilarious social media exchange, Olivia Munn teased a fan for failing to muster the courage to ask for a photo with the X-Men: Apocalypse star on a recent flight during the Thanksgiving holiday.

In a text exchange between the pilot of the flight, Adam Liston, and his wife Mandi, Liston informed her that Munn was on his flight. Mandi urged him to get a photo with her, but ultimately Liston couldn’t figure out what to say and completed the flight without ever approaching Munn.

Liston’s wife teased him on Twitter for his failure to act, tweeting out a photo of their text exchange with the caption “My pilot husband’s ‘free pass’ celebrity crush was on his flight last night and he froze.” She tagged Munn and the Ellen Show in the Tweet.

Munn reacted to the tweet, sharing it and responding with “I would’ve taken the pic, but he never asked. Tell your husband I said thanks for flying us safely and Happy Thanksgiving.”

Liston saw the response from Munn a few hours later and thanked her for the sentiment.

“Thanks @oliviamunn I appreciate that,” he wrote. “It was a combination of trying to keep it professional and your awesome dogs pulling you down the air stairs! Next time I won’t hesitate! Happy Thanksgiving!”

Perhaps on this Thanksgiving, the pilot could be thankful for the possibility of a second chance encounter some day.