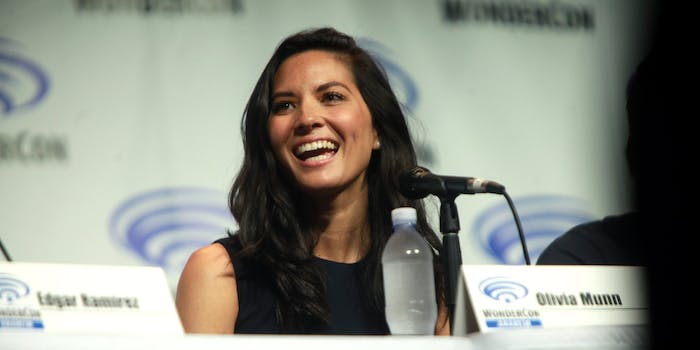 'She took a stance for me.'

A scene was pulled from The Predator last week after actress Olivia Munn spoke out about an actor she worked with. She contacted 20th Century Fox to inform them that Steven Wilder Striegel was a registered sex offender who tried to entice a 14-year-old into a relationship online. The victim of that abuse, now 24, came forward to thank Munn for her support.

Paige Carnes, previously only identified as Jane Doe, told the Los Angeles Times on Thursday she was ready to reclaim her identity.

“I was not able to speak for myself when I was 14. The consequences of this abuse are profound and permanent for some,” she said. “Your abuse does not define you. With support from others and strength from within, you can overcome the label of victim and reclaim your identity.”

The scene featuring Striegel was removed by the studio, and Munn has received support online for stepping up and speaking out, despite criticism from crew members. She says she has not spoken to director Shane Black since the scene was cut. However, several cast members have extended their support in the aftermath of the incident. Striegel is a longtime friend of Black’s and has been featured in several of his movies, including Iron Man 3.

On Thursday, Carnes thanked Munn for standing up for her.

“She took a stance for me. In turn she stood for all who have suffered like I have,” she said. “To be acknowledged by a stranger, on a public platform about this issue is incredibly empowering. The positive feedback from social media towards Olivia Munn is uplifting and feels incredibly supportive for me personally.”

Striegel told the Los Angeles Times in an email that the victim was a distant family member. It was in an attempt to boost her self-esteem, according to Striegel, that he “made the very bad judgement call of telling her in these emails that she was attractive, and sexy, and not a failure, etc.”

A 2009 arrest warrant affidavit alleges physical contact, including “kissing, touching Doe’s breast over her clothing, rubbing her legs and stroking her neck.”

The #MeToo movement called out abusers. But they’re not the only ones in the wrong. Those who know about abuse and not only do nothing but continue to put abusers in positions of power are complicit. https://t.co/QngLCk9fzj

Black has since stated that he was “misled by a friend I really wanted to believe was telling me the truth when he described the circumstances of his conviction. I believe strongly in giving people second chances—but sometimes you discover that chance is not as warranted as you may have hoped.”

The film is in theaters Friday and arrives with a 34 percent “fresh” score from Rotten Tomatoes.