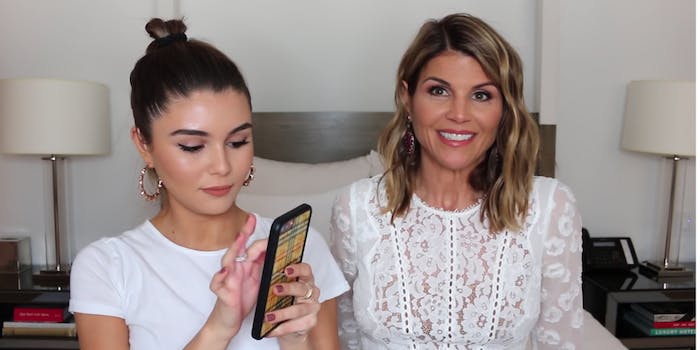 They re-emerged to wish their mom a happy birthday.

Lori Laughlin’s daughters, Isabella and Olivia Jade, took a break from their social media hiatus to wish their mom a happy birthday. The family has been entangled in the notorious college admissions bribery scandal since March.

The pair disappeared from the public eye ever since their parents, Laughlin and designer Mossimo Giannulli, were both charged with conspiracy to commit mail fraud and honest-services mail fraud–a felony. The couple pleaded not guilty to the charges on April 15.

one day late. happy birthday. i love you so much ❤️

In March, news broke that dozens of Hollywood stars and big-name business people were implicated in paying thousands, sometimes millions, of dollars to secure spots at top colleges for their children. The ringleader, William Singer, founded a college prep organization that falsified students’ standardized test scores and bribed coaches to let them into the college with fake athletic credentials.

Bella and Olivia Jade were both admitted to the University of Southern California thanks to half a million dollars their parents forked over and a few photos of them on ergometers to get them successfully recruited onto the USC crew team. A report came out in May, detailing that Olivia Jade knew about her parent’s involvement in the bribery scandal, but simply did not care.

While rumors continue to spread about whether Bella and Olivia Jade have withdrawn from USC, the university released a statement claiming that it’s “placed holds on the accounts of students who may be associated with the alleged admissions scheme.”