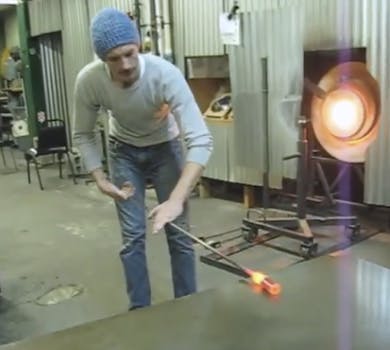 These videos of old-timey crafts are surprisingly entertaining and educational.

Welcome to YouTube, where the past meets the digital age.

No, we’re not talking about the site’s seventh birthday. YouTube’s archives will take you back far further than a mere three-quarters of a decade. Some craftspeople use the thoroughly modern video service to showcase centuries-old trades. This isn’t the stuff of some earnest Colonial Williamsburg demonstration: These digital-age craftsmen put a modern spin on ancient arts.

Here are some old-fashioned crafts you can learn from the comfort of your swivel chair. Now that’s progress!

On Modern Blacksmith, professional metalworker Dan Brazzell combines his ancient trade with a modern sense of humor. The Ashdale, Nova Scotia blacksmith teaches viewers how to work wrought iron, forge axe heads, and identify smithing tools in between comedy acts and juggling. The show is a hit in his hometown, where the local paper recently profiled him. Here’s his latest episode:

Bernard Katz’s glass-blown sculptures reside in galleries the world over, but his namesake studio doesn’t mind sharing his trade secrets on BernardKatzGlass. The Philadelphia studio’s tutorials include all the skills you need to become a world renown glassblower like Katz, but unfortunately you’ll have to provide the talent yourself. Watch as Katz narrates the process of combining two colors on one glass object:

Tandy Leather Factory offers hands-on classes in its Oklahoma City location, but thanks to its YouTube tutorials, anyone can partake in this handicraft first popularized by Wild West cowboys. When they say leathercraft, they mean every kind of leather. Check out this video in which veteran craftsman Charlie Davenport adds some color to a crocodile hide:

From sheep shearing to wool dying to wheel spinning to knitting, Neauveau Fiber Arts demonstrates what life was like before you could just buy a sweater at the store. If it looks like a lot of work, artist Ashley Martineau handily links to her yarn shop, where you can just buy the finished product. Watch Martineau use a spinning wheel to turn sheep wool into yarn:

Depending on the accuracy of that Mayan calendar, Keith H. Burgess’s tutorials might someday be just as applicable to the future as they are to the past. On historicaltrekking, the 64-year-old Australian’s videos run the gamut of century-old skills, from starting a fire and trapping to making tallow for soap and candles. Watch him stalk a duck, 18th-century style: